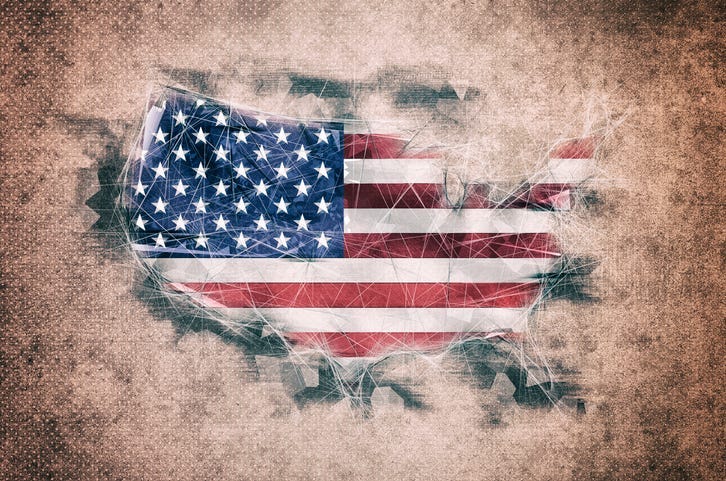 Concern for the survival of the United States of America runs deep within the political tribes on both the right and on the left. Both sides talk about the importance of the 2020 election - now less than 3 months away - and the this includes dire predictions from both sides about the future of America.

Why are you worried about America?

Fox News hosts - Sean Hannity, Mark Levin, and Tucker Carlson - are among those on the right expressing fear that if President Trump is not re-elected in November - America will be taken over by the radical, militant progressive left and this country - as we know it - will cease to exist. Failing to re-elect Trump will usher in a socialist government.

CNN hosts - Anderson Cooper, Don Lemmon and Chris Cuomo - are sounding the alarm that the re-election of President Trump will be the beginning of America turning into a totalitarian government ruled by an autocrat.

Many registered Independents and moderate Republicans and Democrats fear the predictions of both sides.

On my YouTube Channel (Scoot On The Air) - I posted a video that reveals my concerns for America. Progressives promoting more socialism is not the answer - but my primary fear is the possible erosion of America’s democratic republic.

When enough of the voters in America believe the overt misrepresentation of facts and reality by the POTUS - we have the symptoms of a nation that supports a leader who wishes to dictate his policy - as opposed to being the head of the executive branch that executes the laws passed by the legislative branch.

As a businessman who was able to dictate policy and decisions in the private sector - Donald Trump has shown signs that his ultimate goal is to carry that mentality into running the most powerful nation in the world. The head of a business can be a dictator and can answer any opposition by simply saying, “I’m the boss!” But that works for the head of a company - not the President of the United States.

Today, President Trump continues to double down on insisting that the only reason COVID-19 cases are increasing is because testing is increasing; and that contradicts medical experts - including the doctors who are supposed to give President Trump the facts. The President continues to ignore the facts in favor of a fantasy world view of the pandemic. And this is one of many examples.

The unchecked belief of President Trump’s words - no matter how much those words defy the real world - creates the foundation for a president to say what he wants to be true - rather than tell the truth.

From the beginning - it has been the wholesale denial of the severity of the coronavirus pandemic from President Trump that has directly contributed to the unbridled spread of the disease - creating the greatest national health crisis in modern times.

All politicians lie to gain political advantage - but the daily barrage of misinformation from the Trump White House in defiance of the experts and the blind support it is given should send chills up the spine of any America who supports the basic foundations upon which this country was founded.

If the fable about our first president George Washington were realistic - we would have heard it play out this way. George’s father confronts his son and says, “Son, did you chop down the cherry tree?” To reflect the real political world young George’s answer should have been, “Dad, if I don’t tell a lie - how will I ever get to be president?”

Political disagreement is an integral part of America’s unique freedom - but failing to distinguish fact from fiction is a threat to the America we know and love.