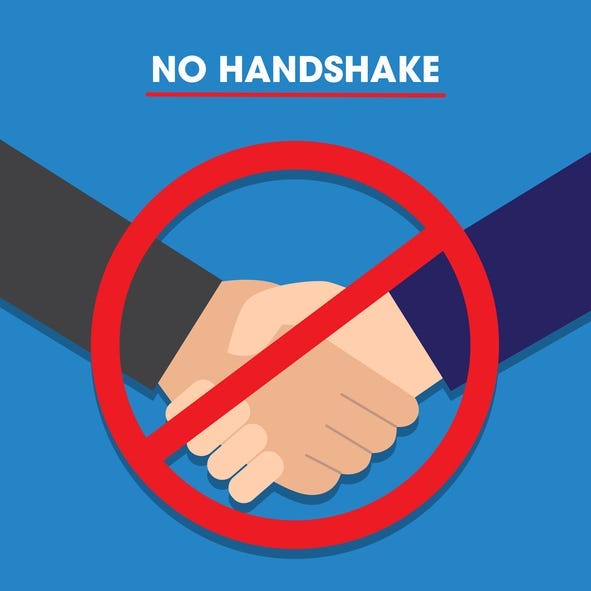 Will shaking hands be a casualty of the coronavirus crisis?

Dr. Anthony Fauci, Director of the National Institute of Allergy and Infectious Diseases and lead medical consultant for the White House, said, “I don’t think we should ever shake hands again.” Dr. Fauci is saying that the fear of spreading coronavirus through human touch should lead to a continued reluctance to shake hands.

Dr. Fauci did walk back on his prediction and said that only represented an extreme example of changed behavior.

The handshake is a traditional form of greeting and in many cases is seen as a gesture that solidifies business dealings. During the coronavirus crisis it is understandable that people do not want to shake hands.  The refusal to shake hands would usually be considered a rude rejection - but now, that has quickly become acceptable and is not seen as a form of rejection. But are we going to give up handshaking after the fear of the coronavirus passes?

The handshake dates back to 5th Century Greece.  It was seen as a symbol of peace - but more significantly - it was a way of showing that neither person was carrying a weapon. It is believed that the up-and-down movement of shaking hands was an actual attempt to shake loose any weapons that a person may have had hidden in their sleeves.

In the 17th Century - Quakers believed the handclasp of a handshake was a gesture of equality, and it ultimately replaced bowing or the tipping of one’s hat.

Today - handshaking is a common greeting that has become instinctual, and avoiding to offer the gesture or the rejection of another person’s extended hand presents an awkward moment. Handshakes are often used as the sign of intent of an agreement.

Since I have openly been a germaphobe - I have had many listeners approach me and ask if I shake hands. I have always been willing to shake hands but don’t be offended if I then wash my hands before I put my hands to my face of touch food.  As a germaphobe - there is a part of handshaking that I could do without - but as a friendly person - I can’t imagine never shaking hands again.

While different cultures have different versions and views of the handshake - in America - the handshake is an integral part of everyday life and it is hard to imagine an American society void of handshaking.

The physical and emotional toll of the coronavirus crisis on Americans is profound, and there is little doubt that our lives will be changed forever. But it is hard to think about adjusting to never shaking hands again.

Do you think the handshake will be acceptable again after the peak of the crisis passes?

music
'Elf' Star James Caan Reveals Why There Has Never Been a Sequel to the Christmas Classic
i'm listening
I'm Listening: Dr. Michael Lindsay Sees an Increase in Childhood Anxiety During COVID and Social Unrest
sports
Megan Rapinoe, Sports World React to Passing of Ruth Bader Ginsburg
news
Jueza Ruth Bader Ginsburg Muere a los 87
news
Ruth Bader Ginsburg Dies at 87
music
Will There Be a Red Carpet? Here's Everything We Know About the 2020 Emmys