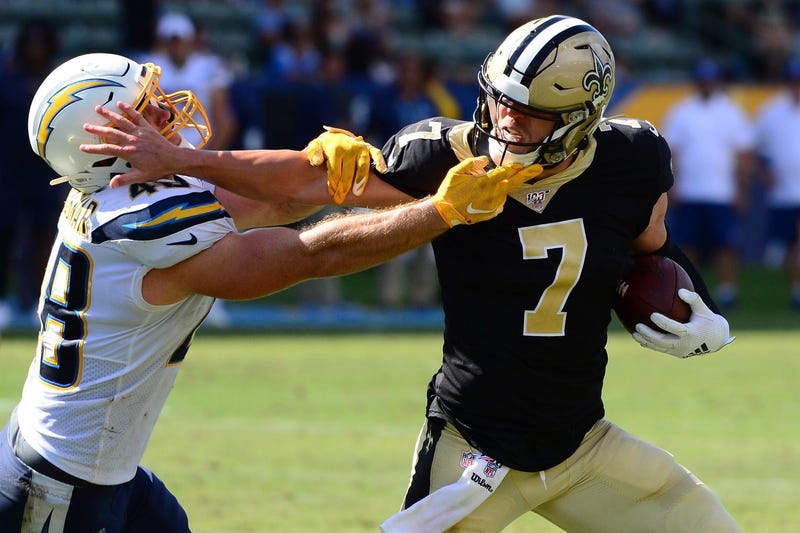 The Saints came from behind to beat the Chargers 19-17 after a fourth quarter rally engineered, in part, by quarterback Taysom Hill.  That gave the Saints their first pre-season win and some momentum heading back home to New Orleans, but it may have been a pyrrhic victory.

At least five Saints players were banged up in the battle against Los Angeles.  Linebackers Vince Biegel and Craig Robertson, defensive lineman Mario Edwards Jr., and offensive lineman Chris Clark and Michael Ola went down at various points throughout the game.

Robertson could be the team's biggest loss of that group, being one of the team's special teams' aces.  Saints Radio Network color analyst Deuce McAllister said, after the game on 'The Point After Show,' that he heard from team trainers it might not be good.

"Craig, talking to the trainers, felt like he heard something pop," McAllister relayed.  "So we'll have to see what his status is."

It's unlikely the public will learn much about these injuries, unless they indeed turn out to be serious enough to land a player on the team's injured reserve list.

"Coach Payton doesn't have to really officially acknowledge these injuries," McAllister noted.  "He does sometimes when guys go on IR."

NFL teams consistently battle injury demons in the preseason.  It's not uncommon for a team to go from Super Bowl favorite to afterthought in the span of a few weeks, if serious injuries start piling up on their stars.  While none of the Saints players lost in this game are of importance as, say, Drew Brees or Cam Jordan, today's attrition has a chance to deal a fairly severe blow to the team's depth.  The franchise signed Edwards Jr. in free agency to help relieve the loss of Alex Okafor, and Ola could be the team's best backup offensive tackle.  Then there's Robertson, an irreplaceable part on special teams.

"Hopefully, we'll get all of those guys back healthy and most of them that aren't that long term so they're ready for the regular season," McAllister said.

Well that was certainly preseasony

While quarterback Teddy Bridgewater escaped unscathed physically, his ego was perhaps a bit battered.  Bridgewater suffered through a sordid performance, going 5/12 through the air for just 50 yards and an interception.  Bridgewater had already been the subject of (unwarranted) scorn by some Saints, who didn't like his performance in the team's quarterback challenge competition with the Chargers during joint-practice sessions this week.

McAllister was at a loss trying to understand why fans are evaluating Bridgewater's preseason through the lens of a few throws during a carnival-style gimmick game and one half of bad football.

"It's amazing.  I guess that's how we're judging quarterbacks now, in the QB challenge.  Larry Warford participated in the QB Challenge, so what did (the fans) think about Larry as a quarterback or his accuracy," an exasperated McAllister eye-rolled over the airwaves on the Saints Radio Network.

"When you go back and look how did he play last week.  The thing that he did last week was holding the ball.  I think there was one play today where he held the ball probably too long.  Outside of that even Sean (Payton) commented that he didn't have a lot of help, whether it was coverage or routes, or whatever."

Still, it wasn't Bridgewater's best day.  Hill was the undisputed best backup quarterback on the field today for the team, although those roles were reversed just a week ago when it was Hill throwing the interception and Bridgewater the touchdown.  The play of both quarterbacks can be criticized during the preseason.  Perfect football rarely, if ever, happens this time of year.

"That's not going to be the case," McAllister said of fans wishing for flawless quarterback play.  "It's a work in progress.  And today I'll tell you, he didn't have a good game.  He did not have a good game."

The Saints now return to New Orleans to practice before playing on the road against the New York Jets next Saturday.

Listen to McAllister's full post-game commentary in the podcast below.