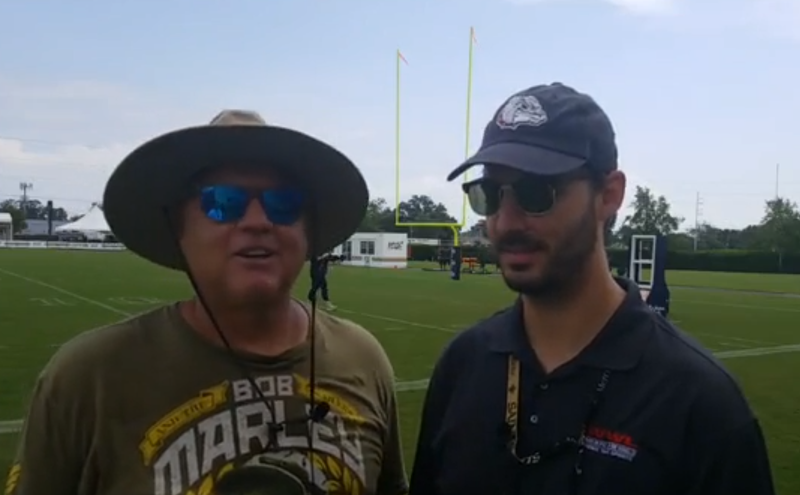 The Saints were still reeling a bit over the weekend after a lackluster performance in the first preseason game against the Vikings, a 34-25 loss in the Mercedes-Benz Superdome.  The defense, which had been so good in training camp, failed to show the flashes of excellence during a game situation.

Head coach Sean Payton even mentioned that the team had hit a proverbial wall during the weekend's practices, not something we're used to hearing Payton say in front of the media.  It seemed like a coach trying to give his team a shot in the arm, and it might have worked.

Bobby Hebert, who took in the past two days' practices, said there was a marked difference in the intensity and execution today.

"You know how you hit a wall?  When you're dealing with an injury, or something is nagging you.  So that's the thing, trying to stay healthy," Hebert said as a reason for the drop in performance over the past few days.   "Having all hands on deck possibly, we'll have to wait to see what occurs, against the Chargers in practice and during the game."

The Saints may not have Alvin Kamara at full strength during their join-practices with the Chargers.  Kamara has missed the last two practices, something Bobby isn't too concerned about.

"That's what I'm saying," Hebert said about another important veteran's absence.  "We don't need (Kamara) for the Chargers.  We don't need him until Monday night against the Texans."

While Kamara may not be on the field, Marcus Davenport surely will be.  Davenport's development on the defensive line is critical to the Saints improving on that side of the ball this year.  Davenport was nearly invisible on Friday, with no sacks and no hurries.   Hebert is starting to get a little concerned about Davenport's production, or lack there of.

"Pedestrian.  Pedestrian.  He did not show out.  Trey Hendrickson played like the higher draft pick.  You should never play a game where you're not hitting the quarterback.  We didn't have any sacks, and just one quarterback hurry,"  Hebert explained.  "We need him to step up and be a beat opposite of Cam Jordan.  He can't just be a good NFL player.  He has to be great because of what you gave up for him, where he was drafted.  That just comes with the territory, expectations."

Now it's off to Los Angeles, where the Saints will practice with the Chargers on Thursday and Friday in preparation for their preseason contest on Sunday.

"Our defense going against Philip Rivers.  It doesn't get any better than that," Hebert hyped up the matchup.  "If you're a Who Dat Nation member out in California, go to that practice on Thursday.  It's going to be really competitive."

Watch Hebert's full post-practice breakdown and comments in the video below.