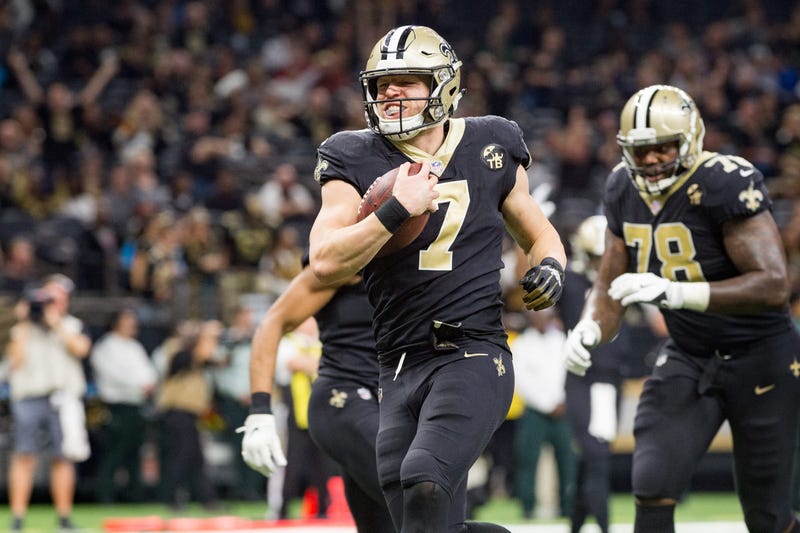 At first blush, Taysom Hill's performance in the New Orleans Saints' first preseason game could seem like a bit of a disappointment.  The box score shows Hill threw for just 80 yards and tossed an interception that was returned for a touchdown.  Box scores and stats, however, miss the nuance in football games, and this one certainly does a bit of a disservice to Hill's game against the Vikings.

That pick-six came after a nicely thrown pass from Hill that was juggled by tight end Dan Arnold.  When Arnold couldn't secure the ball, Vikings cornerback Nate Meadors grabbed it out of the air and raced into the end zone.  A bummer for Hill, but much more on an indictment on Arnold, who fans may remember dropped what could have been the game-sealing touchdown pass in January's NFC Championship game against the Rams.

But drops happen.  So do bobbles, and weird interceptions.  When Hill was asked about that play after practice on Monday, he did what all good quarterbacks do; deflect and make sure everybody knows that he has his receiver's back.

"It's football, ya know.  I think at the end of the day we've all been in situations as football players where you'd like to have plays back.  No one is ever going to step on the field and purposefully try to make a mistake," Hill explained.   "So, look, no harm no foul.  We certainly hope those things don't continue to happen by any means, but stuff happens.  And Dan's been a guy who tries hard, and that's what preseason games are for.  Get our an play fast, play physical, and somethings things happen."

Bobby Hebert says the #Saints have broken through that "wall" they hit this weekend, isn't worried about Alvin Kamara missing practice, but is a bit concerned about Marcus Davenport's lack of production.Watch his post-practice thoughts: https://t.co/npx5vhjw1A

Preseason is already an odd exercise where many roster regulars are playing with guys who won't be on the team in less than a month.  NFL teams are allowed to have 90 players on their preseason roster, not counting injury and other designations.  That means at least 37 players won't be on the final 53-man roster when the Saints open up the regular season on September 7.

"Overall, preseason (game) one you're playing with a lot of guys you haven't played with ever, really, in a game situation," Hill said.  "I think overall I was happy with the way we moved the ball and we put points on the board.  I think there are always plays you'd like to have back, and there's a few I would like to have back for sure."

The cynical fan would ask why quarterbacks can't just go out there and sling it around no matter who they're throwing it too.

"It's hard because football, it's all about timing.  It's a game of inches.  There's route running, there's so many things that are factored into a play being successful.  Until you have a lot of time on task with guys you don't quite know . . . there are a lot of variables as you go into a game."

The Saints offense looks like a bit of a work in progress at camp, but practice can be deceiving.  The offense had similar struggles last preseason, but turned into a top-10 unit by most statistical measures during the regular season.

Perhaps they need a better measuring stick than than they get every day practicing against their defensive teammates.  Well, the Saints will get just that this week when they travel to Los Angeles to hold joint practices with the Chargers on Thursday and Friday, before the two teams play on Sunday.

"It's a good experience for all of us.  You get to this point in camp and you've played against your defense so many times that you're starting to learn coverages and different things your defense is trying to do," Hill said.  "So it's nice to see different looks and see different people.  That's something that we all look forward to, getting ready to go to L.A."

Hill, and the other Saints quarterbacks, will get a nice challenge from a very good Chargers defensive group this week.  Arnold will also have a chance to redeem himself.  Remember, very few people remember mistakes that happen in early August.  Many more remember how many games you win in September and beyond.

Listen to Taysom Hill's full post-practice comments in the podcast below.