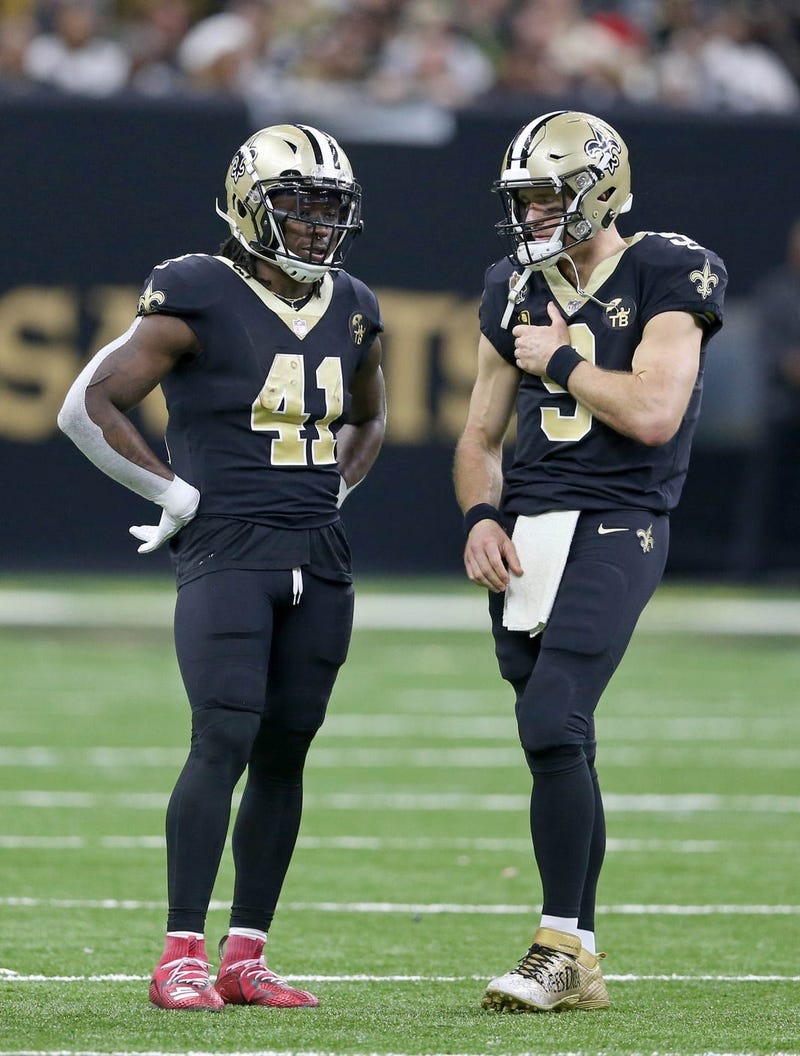 With a week of rest now in the rearview mirror, the Saints offense could be closer to full strength if not fully healthy when they return to action this Sunday. On the heels of getting Drew Brees back in the lineup in the last game before the bye week, the Saints should also get Alvin Kamara back this Sunday.

Kamara was back on the practice field today, and he’s one of the NFL’s most explosive and elusive rushers, but Latavius Murray did well for the Black and Gold while Kamara was out. Murray ran for 221 yards in the Saints’ last two outings, and Brees says he feels the team has a very viable one-two punch in the backfield.

“You really want both of those guys out there as much as possible, but at the end of the day, they share the load,” Brees said Wednesday night during his weekly WWL Radio appearance. “Also, when you just think about wear and tear, it gives those guys the opportunity to hopefully stay healthier by having the complement of each other.

“Obviously we know what Alvin Kamara is capable of, and I think everyone has seen what Latavius Murray is capable of as well over the last few games in Alvin’s absence, that he can carry the load and he can do everything we need him to do. So it’s great. It’s great having both of them. And we’ll see how it shakes out, but definitely I think just the balance for both. It allows them both to get involved and kind of find that rhythm, find that groove throughout the course of the game. And obviously they’re both impact players, too.”

Brees also addressed the stretch of games the Saints have on the horizon, with four straight divisional opponents on tap beginning this Sunday.

“That’s something that you see the NFL doing with the scheduling,” Brees said. “I think it’s good. I think it makes those games more meaningful, more impactful at the end of the year. Now you’re talking about division winners, and therefore it’s affecting home-game playoffs and wild-card… it seems like there’s a lot more that can happen when you have divisional games being played down the stretch. I feel like it’s been like that now for the last three or four years, and I think it’s made a big difference as far as just the impact and the meaning of those games.”

Brees and the Saints face off with the Atlanta Falcons this Sunday at noon in the Mercedes-Benz Superdome. Our coverage on WWL starts that morning at 8. You can hear the full audio of Brees with Bobby Hebert on “QB To QB” by clicking the podcast link.

music
Meghan Markle reveals she had a miscarriage: 'I tried to imagine how we'd heal'
news
Will essential workers get earlier access to COVID vaccines?
music
Vote now for RADIO.COM Artist of the Year
music
Pete Davidson to star in revamped version of ‘It’s a Wonderful Life’
news
What does a safe classroom look like?
news
Macy's Thanksgiving Day Parade will go on virtually on Thursday