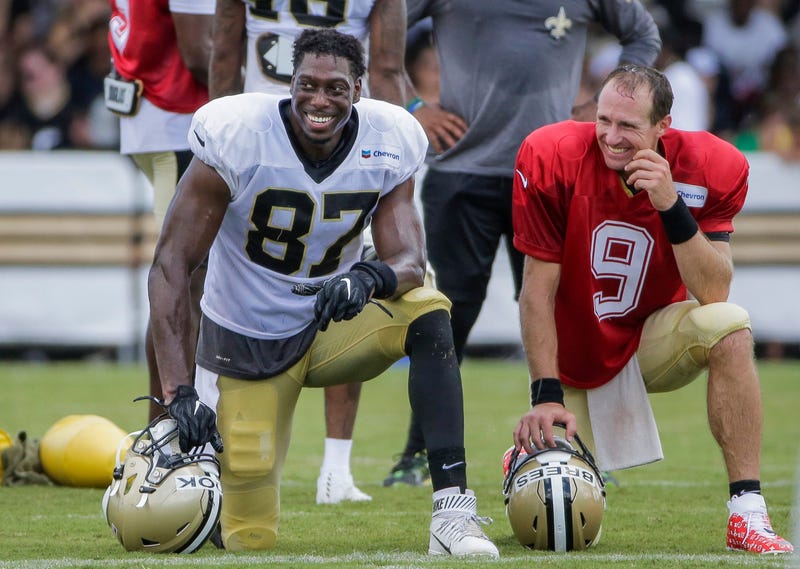 Michael Thomas watch entered day 4 at Saints training camp, and still no sign of the wide receiver as he hold outs for a contract extension.  There were a few other players not on the field. Running backs Latavious Murray and Buck Allen, along with safety Marcus Williams and defensive back Chris Campbell were not present. Cameron Meredith was also M.I.A., but that is because the 26 year old receiver has been released.  He never fully recovered from an ACL tear that he suffered in the preseason of 2017 and ended up making just 6 appearances in Black & Gold a year ago.

A big reason the Saints were at ease letting Meredith go is that a number of their young talent at receiver have been showing up and showing out.  It’s also been one positive to Cant Guard Mike’s holdout as there have been more opportunities for them to shine.

Emmanuel Butler continues to win over fans, the media and certainly the Saints. The undrafted wide receiver out of Northern Arizona has been making plays all day, every day

Tre’Quan Smith is showing growth in his second training camp.  He’s been on the same page with QB Drew Brees and looks to be running better routes which shows maturation in his game.  Keith Kirkwood is another guy form a year ago who’s been putting in good work and you can tell has the trust of Brees as he’s mostly been running with the ones in Cant Guard Mike’s absence.

Jared Cook-in’ up something spicy for 2019

When Jared Cook was signed in free agency, thoughts of how he’s be used in the Saints offense made Who Dats giddy. He’s a long, lean, pass catching machine that set career highs with 68 receptions for 896 and 6 touchdowns last year with the Raiders.  You can see that the bond between him and Brees is strengthening as the two get more and more comfortable with each other.

Some fire to the Brees / Cook hype pic.twitter.com/PIewS2l8VS

Saquan and CJ getting some time with the ones

With Marcus Williams out, 6th round draft pick Saquan Hampton got a chance to play free safety with the first team defense and came away with a pass break up. 4th round selection CJ Garnder-Jonshon also rotated in with the ones taking snaps in the nickel role.  Both have shown no hesitation in adapting to the pro game from college and play aggressive.

We had a little extra pushing and shoving today for the first “fight” of training camp. Defensive end Trey Hendrickson and rookie tight end Alize Mack threw some fists at one anther but didn’t really land anything before it was broken up.  Mack did toss his helmet at Hendrickson, who has been a part of a skirmish now in each of his three training camps since getting drafted in the 3rd round in 2017.