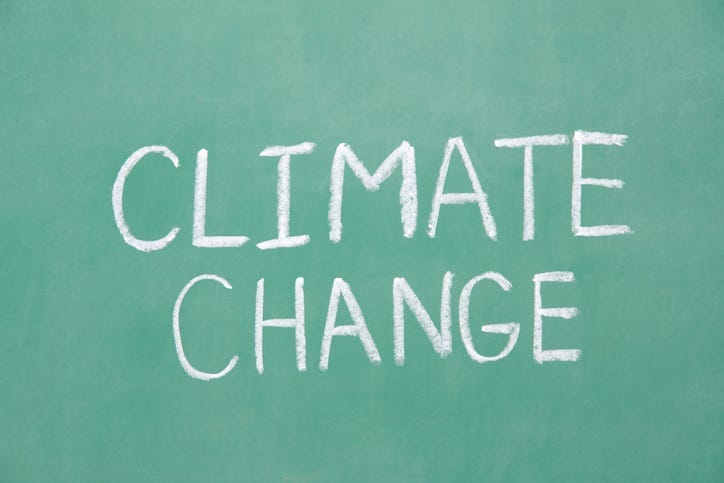 I’ve gotten many a head-scratching text via our 870-870 listener text line but none more so than this in relation to a discussion about climate change. It read: "Climate change is a hoax. The planet has been changing for over ten thousand years and you can read that in the Bible, in Genesis, when God created the earth in seven days and made Adam and Eve 4000 years ago."

Wait. What? I think the texter was mixing religion with politics to express a view on climate change. What’s noticeably absent is science.

In a way, I think that sums up man-made climate change. It's almost like a religion. Some follow the dogma, some question it.  Some blindly accept the teachings as presented while others vehemently question them. And, of course, there are the agnostics who don’t know what’s real from what isn’t and decide to deal with it later.

I hope we can all agree the climate is changing. That can be proven through melting glaciers, rising seas and numerous atypical weather occurrences as verified by the U.S. military and other government agencies. It would have to be one hell of a conspiracy to pull that off. So I hope we all agree on that. I know, however, we can’t agree as to whether it's man-made or not. That’s where faith enters the equation.

Reams upon reams of paper carry words written by climatologists, military personnel, corporations, politicians and others proving or disproving the argument that climate change is man-made. Even if most of us could understand the science involved we could find compelling arguments on both sides of the issue not to mention our own pre-existing beliefs. Which brings me to faith.

Much like religion, at some point most of us make decisions based on faith. You believe in Allah or you trust that Jesus is real or you may still be waiting for a messiah to deliver you to the promised land. Can any of it be proven? Nope. But we do make a decision based not on evidence but on what we believe is best for us. That’s why I have decided to have faith that climate change is real and man made. I also think we, as a world, need to unite as though we were being attacked by aliens trying to destroy our earth, our home. If we would do that to face an exterior threat, why not err on the side of caution and face a possible threat from within the same way.

Common sense dictates to me that unless you have a Plan B, you’d better make damned sure Plan A works. We have nowhere else to go. There is no Plan(et) B. So lets be pragmatic and do what we can to save what we have.

Oh, and speaking of pragamitism, I have a home in Belle Chasse. I’ve already advised my kid to sell it as soon as I’m gone. She’s got an asset worth hundreds of thousand dollars now. It could be worthless marsh in the not too distant future. You gotta cut your losses. You gotta be pragmatic, right?