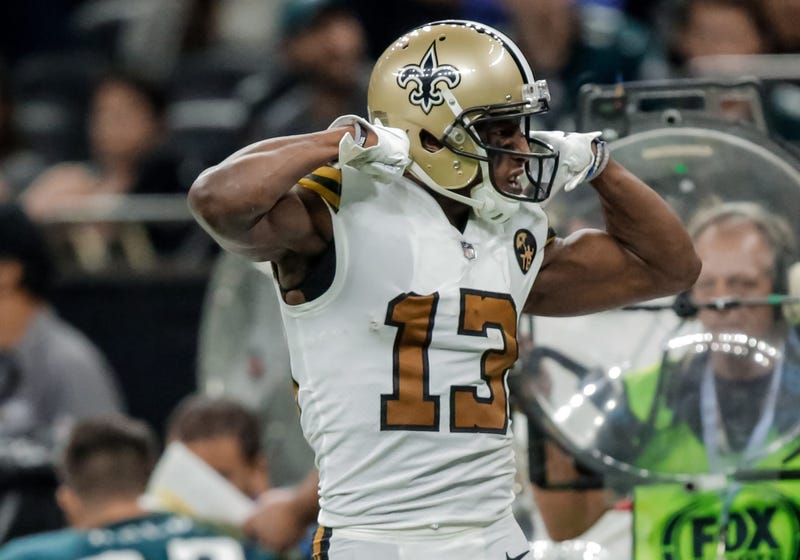 Every now and then you hear a sound bite and you immediately know it’s going to become iconic. If often happens in the NFL. Remember…

“What’s that? Ah – Playoffs? Don’t talk about – playoffs? You kidding me? Playoffs. I just hope we can win a game!”
- Jim Mora, Indianapolis Colts
“They are who we thought they are. And we let ‘em off the hook!”
- Dennis Green, Arizona Cardinals
“You play to win the game.”
- Herman Edwards, New York Jets
“You gotta PAY to win the game”
- Tommy Tucker, long time Saints fan

Okay so maybe that last one’s not iconic, but it IS true. The die is cast. We have crossed the Rubicon. Elvis has left the building. The deal is done. Signed, sealed and delivered. (insert your favorite metaphor here).

No matter how you say it Michael (#CantguardMike) Thomas has ended his holdout and returns to the Saints practice field on Thursday. Mike is now (for the time being at least) the highest paid receiver in NFL history. The terms of the contract: $100 million over five years with $61 million guaranteed. That’s a lot of money. But that’s a lot of receiver.

It’s hard to pick the right guy in the NFL. He has to have a rare, God-given ability. He has to be a hard worker. He has to be of good character. He has to produce when the lights come on. Once you find ALL of those qualities, as have the Saints in Michael Thomas, you have to pay him.

I was surprised this morning at the texts and calls I received complaining about the deal to extend Mike’s contract. The same people who hate socialism and think there should be no limit to CEO compensation apparently believe all NFL players should be paid the same. Sounds like socialism to me. In the NFL, as in AMERICA, any one deserves to be compensated for what they bring to the company and what the market says they’re worth. That’s exactly what happened with Michael Thomas.

The Saints picked the right guy. I don’t know how you can possibly say they didn’t. He’s proven himself. All that was left was to pay him. The Saints did. Now let’s move on and win another damned SuperBowl.

You gotta PAY to win the game, am I right fellas? Am I right?