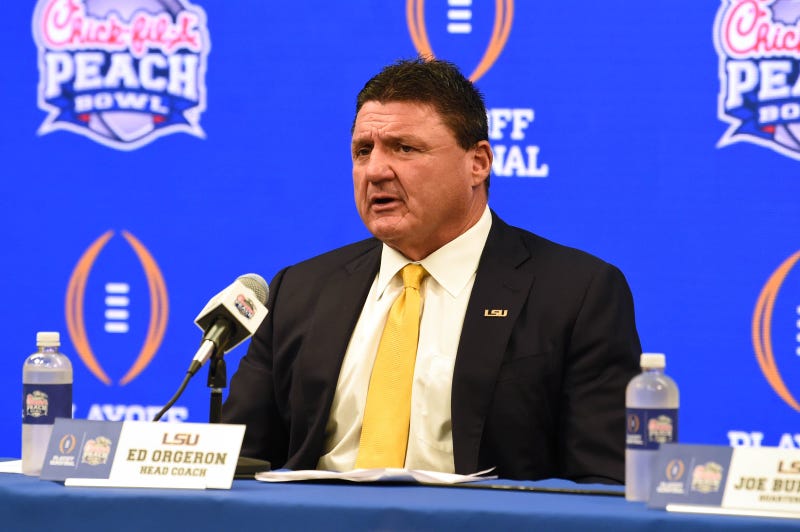 The LSU Tigers are fresh off their College Football Playoff victory over the Oklahoma Sooners. Coach Orgeron took some time to join Mike Detillier and the Cajun Cannon Bobby Hebert to talk about his team’s performance against the Sooners.

LSU QB Joe Burrow finished the game with 493 yards passing with seven touchdown. 227 of those yards and four touchdowns came went to wide receiver Justin Jefferson. Coach O says Burrow has a special connection with all his receivers.

"I think he and Joe have that rhythm. They have that connection. Joe wants to look for #2. It’s about competing and one thing about Justin is that he’s competitive," Oregeron saidHis family is competitive and he’s got purple and gold in his veins. The guy wants the football and he’s a great route runner."

The Tigers went into halftime with a 49-14 lead, and the question of whether the Tigers would ease up in the 2nd half was answered.

"We talk about playing LSU standard football. We knew that Oklahoma had come back on some other teams, but we weren’t going to give them a glimmer of hope. We put the pedal to the metal and played 60 minutes. Our guys enjoy playing. They were fresh and ready to go. They enjoyed playing that game."

The Tigers broke multiple Peach Bowl or LSU records whether it was points scored or yards gained. Coach O says none of that would have been possible if not for the offensive line protecting Joe Burrow.

"That is the most improved unit on our football team. Lloyd Cushenberry has become a great leader. Adrian Magee has become the unsung hero. He’s played left guard, right guard, left tackle."

He even gave us an update on offensive guard Damien Lewis who injured his ankle during the 1st half of the Peach Bowl.

"I think Damien (Lewis) is going to be fine," Orgeron announce. "It’s going to take a little while to heal, but two weeks should be fine. We will be healthy and ready to go."

Another player who should be ready to play against Clemson is linebacker Michael Divinity Jr. The senior linebacker from Marrero is set to return for the national championship after announcing he was leaving the team in November.

“That door is open. We haven’t finalized everything yet, but everything looks good. There’s a high possibility that Michael will be ready to play,” Coach O said.

Finally, with the Tigers blowing out their opponents the past few games, backup quarterback Myles Brennan has gotten a significant amount of playing time in the second half of games. Coach O was very appreciative of the work Brennan’s put in this season and thinks the future is bright.

"Myles has done a good job. He does things a little different than Joe, but I think we formulate the offense to his specific skills. I think Steve Ensminger and Joe Brady are going to do a tremendous job with Myles."

The Tigers will head to New Orleans to take on the Clemson Tigers on January 13th for the national championship. LSU is looking for their fourth championship in the school’s history.