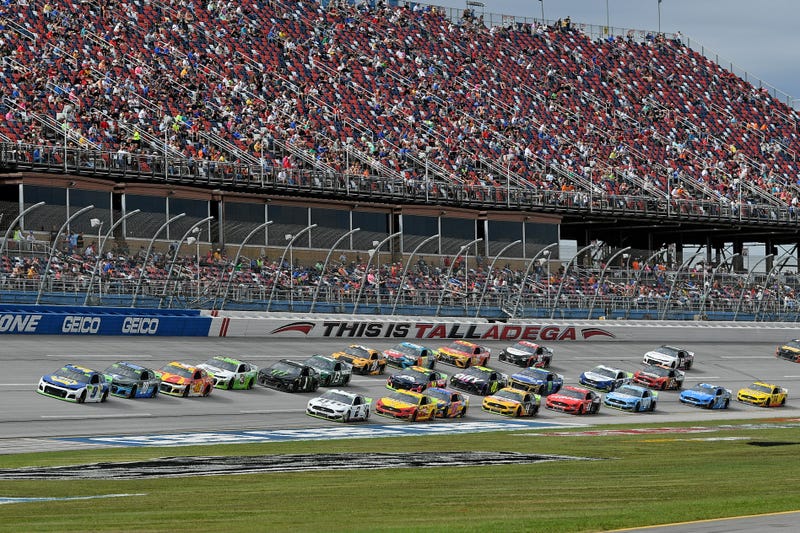 NASCAR returns to a popular superspeedway this week for the Geico 500 at Talladega Speedway. This is the first superspeedway race since the Daytona 500 at the start of the season. Drivers go into the race knowing wrecks will happen so managing their cars and avoiding damage is the biggest key to success for this race.

Toyota has won two straight races coming into Talladega, with wins by Martin Truex Jr at Martinsville and Denny Hamlin at Homestead. Now all three JGR cars of Truex, Hamlin and Kyle Busch will start in the first three spots in this Sunday’s race.

Qualifying position won’t matter too much, but do expect the Toyotas to work together and lead up front for the first stage of the race. Chase Elliott is your defending Geico 500 winner; he’ll start 11th. Four active drivers have multiple wins at Talladega, including Penske teams Brad Keselowski and Joey Logano. While these races can be unpredictable, finding drivers who thrive off superspeedway races are the ones you should target.

No active driver has more wins at Talladega than the #2 car of Brad Keselowski’s. He’s won at this track five times, but his last top-10 finish was back in 2017 when he finished in victory lane. Since then, Keselowski has finished with mediocre results, but has led laps in each of those races.

Keselowski has benefited a lot since the restart of the season, finishing in the top-3 three times with two wins. He also has finished top-10 in seven of the eight races. I like the speed he’s shown, and I think you’ll see the Penske Fords work together to make their up front to challenge the Toyotas.

The #2 car is only one of three cars with single digit odds to win, and I think if you have to pick a favorite to win. Keselowski would be my driver.

The other Penske driver that could give their team a win this weekend is Joey Logano. While Logano hasn’t been on my radar since his wreck at Bristol, I do think he’s a decent pivot if you don’t want to jump on the #2 car of Keselowski.

Logano has a win here in 2018, and he has some of the best results in the last five races at Talladega. The #2 car has finished in the top-5 four times in that span. You also want drivers who aren’t scared to make moves and find ways of getting up front, and Logano is exactly that driver.

While I think Keselowski is the car to beat this weekend, Logano has shown he will be a factor. I wouldn’t be opposed to taking both drivers at 9/1 odds.

The 2017 Daytona 500 winners has shown he can win at superspeedways, and this may be the track where he gets his first checkered flag of the season. Busch has a boom-or-bust mentality when it comes to Talladega. He’s finished inside the top-8 five times since 2015 in the eight races during that span, but he’s also wrecked out while running up front in the others.

Busch has seen victory lane just once in each of the last three seasons since his win at Daytona, and this race is setting up for another opportunity to do so. He’s also adding on multiple top-10 finishes each week since the restart, so his car has shown speed.

Bowman has struggled since the restart, and this could be the race where he turns it around. In the eight races so far, the #88 car has only finished inside the top-10 twice. But he comes to a track this weekend where luck could be on his side.

Bowman finished in last year’s Geico 500 in 2nd place right behind his teammate Chase Elliott. We know the Hendrick cars have shown speed this year and working together could pay off for the Chevrolets.

In the last two races here at Talladega, Bowman has three top-3 stage finishes. If the #88 car can just put a full race together, I think he’s the sneaky play to get back to victory lane in 2020.

I mentioned that the Hendrick cars have speed.  Well, if we’re taking a longshot, why not go with the #24 car? Byron is still looking for his first NASCAR Cup win of his career, and it could come this week at a race that is unpredictable.

Byron had a stage win in last year’s fall race at Talladega and has earned stage points in each Talladega race in 2019. While he's considered a longshot, this race actually gives him one of his best chances of winning this season. Byron and Bowman could add their names to the list of Hendrick drivers with Geico 500 wins, which include Jeff Gordon, Jimmie Johnson, Dale Earnhardt Jr and Chase Elliott.

The Geico 500 at Talladega Speedway is schedule for the green flag at 2:19pm Central Time this Sunday. Stages 1 & 2 will feature 55 laps with the final stage having 78 laps for a total of 188. This will be the 9th race since NASCAR resumed and the 13th of the season.