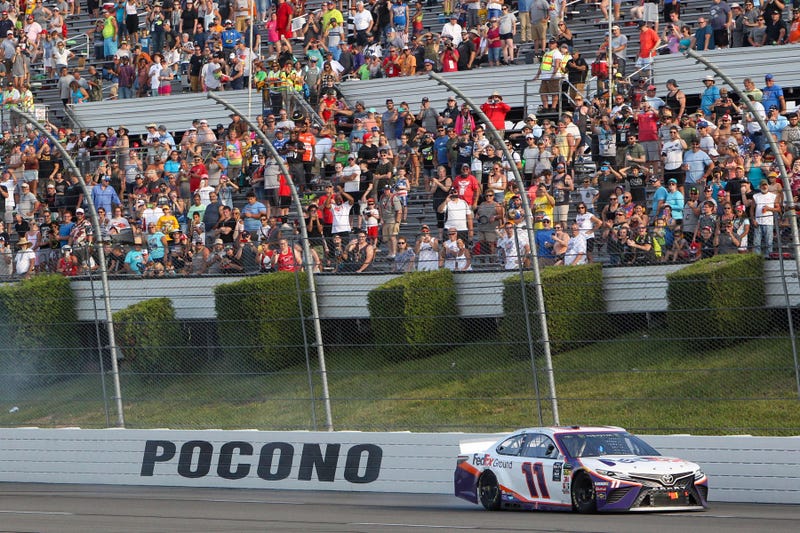 NASCAR heads to the “Tricky Triangle” this week in what will be a busy weekend at the track. There are two races scheduled this weekend, one on Saturday (Pocono Organics 325) and another on Sunday (Pocono 350).

Pocono is a unique track as it’s not your traditional cookie cutter speedway. It’s shaped like a triangle and features three different left turns. Modeled after Trenton Speedway, Indianapolis Motor Speedway and the Milwaukee Mile, drivers will have their hands full taking three different lines throughout the race.

When trying to find drivers who are successful at this racetrack, look for drivers who also have good results at California Auto Club and Michigan Speedway because of their flat track surfaces. The two guys that stick out from the rest of the field are two former NASCAR Champions Kyle Busch and Kevin Harvick.

Looking at past results, the Toyotas have come here and left with five straight wins. Kyle Busch has won three of those five checkered flags for Joe Gibbs Racing. JGR also have 14 wins at Pocono since 1999, which is the most of any NASCAR team.

Although, the Toyotas are getting a lot of love heading into this weekend, they’ll have some competition as the Fords have now won five of the nine races since the 2020 restart. As for the Chevrolets, they may be the odd man out as they’ve only won one race since NASCAR resumed; and that was Chase Elliott in Charlotte. Chevrolet is also looking for their first win at Pocono since 2016 when Kurt Busch won.

As each week goes, Kyle Busch’s winless streak grows. We’re headed to NASCAR’s fourteenth race this season and the #18 car has yet to see victory lane. I think that changes this week as Busch returns to a track in which he’s dominated the past few seasons. Like I mentioned earlier, he has three wins in the last five Pocono races, including 273 laps led. He’s finished top-3 in stage points six times with three stage wins since the introduction of stages in 2017.

His Joe Gibbs Racing teammates of Denny Hamlin and Martin Truex Jr have both gotten to victory lane in the past three weeks, and his car looks to be headed there soon. The sportsbooks still have him as a favorite for a reason even without victory this season.

The one man who can challenge Kyle Busch on his Pocono dominance is Kevin Harvick and his #4 Ford Mustang. Like the #18 car, Harvick has racked up multiple top-3 stage finishes including eight since 2017. The only thing that’s held Harvick back is a victory at Pocono. He has yet to win here, but does have multiple 2nd place and top-5 finishes in the last five seasons

Harvick has shown a ton of speed on 1.5 mile intermediate tracks so far this season, so I think that same horsepower will be on display again in Pocono. He looks to join Denny Hamlin to be the only two drivers to be three time winners this season.

As far as betting this weekend, I wouldn’t be opposed to taking both the #18 and #4 as your only two options. It's likely at least one of them will find victory lane.

Nobody has more momentum right now than Ryan Blaney and his #12 Ford Mustang. Coming off a win at Talladega, Blaney now has four straight top-5 finishes and seven total on the season. Pocono is the track Blaney picked up his first NASCAR Cup Series win in the #21 car of the Wood Brothers in 2017.

Since that win, his results here have been average with a couple top-15 finishes. He now comes in with arguably the best Ford Mustang of the Penske trio and is looking for back to back wins. It wouldn’t be a shock to see #12 taking home a checkered flag this weekend.

The one Toyota driver that’s been overlook this season is the #20 car of Erik Jones. He’s in a contract year with JGR and is coming off a top-5 finish at Talladega. While his teammates have all won here recently, Jones has come so close each time.

Last season, Jones finished second and third place in the two Pocono races and has only finished outside the top-8 once in his six career races here. If there’s a driver that is really looking forward to a double header, it has to be Jones and his Toyota team. I think a top-5 finish and possible win could be in the making.

Our final driver is someone who already has a win this season. Bowman won at Auto Club before the coronavirus shutdown, but he hasn’t been the same driver since. He now comes to Pocono which has a similar feel to Fontana’s track surface which will be beneficial to him.

The Chevrolets are looking to end a four year drought and it could start with the #88 car. Bowman does have a 3rd place finish here in 2018, but has yet to lead a lap at this racetrack. He has a good chance of repeating another top-5 finish this weekend.

Green flag on Saturday is expected to drop at 2:49pm Central Time. It will feature two stages of 30 laps each and a final stage of 70 for a total of 130 laps.

Sunday’s race is scheduled for 3pm Central Time. That race will be a little bit longer as it was feature an additional 10 more laps.