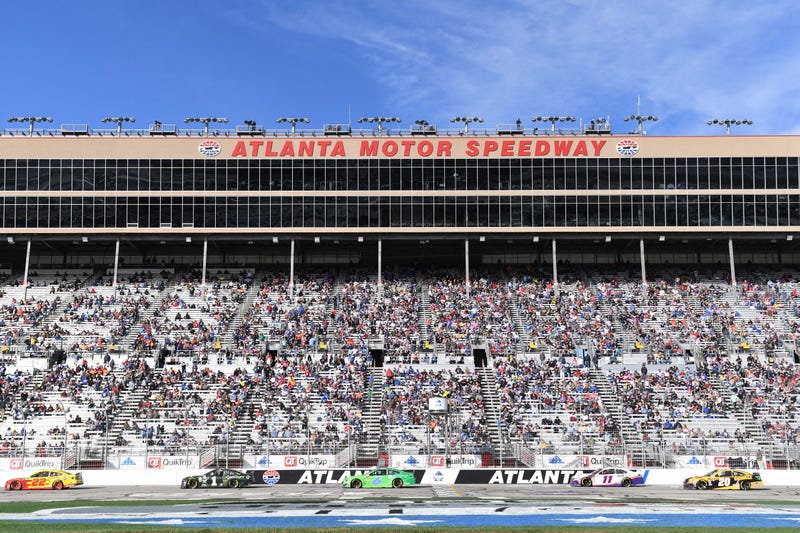 NASCAR will return to Atlanta Motor Speedway this weekend as drivers prepare for their sixth race since the season restart. The season was halted earlier in the year in Atlanta for the Folds of Honor QuikTrip 500 due to the coronavirus pandemic. Now drivers return to the 1.5 mile long track for 500 miles this Sunday.

Atlanta Motor Speedway is one of the tracks where tire wear is very important for drivers. There’s a huge falloff from new to used tires so if there happens to be a late restart like we saw last week in Bristol, it could play a huge factor in determining a winner.

The cars that come here with the most speed are the Hendrick Chevrolets. Chase Elliott will start on the poll while teammates Alex Bowman and Jimmie Johnson both expect to make their way upfront.

Other teams that have shown speed historically in Atlanta are the Fords of Penske and Stewart-Haas. Ford has won three straight with two of them coming from Brad Keselowski (2019 & 2017) and Kevin Harvick (2018).

Harvick comes into this race as your favorite with (5/1) opening odds. Last week’s winner and defending QuikTrip 500 race winner Brad Keselowski is (8/1). Pole sitter Chase Elliott in at (6/1), and his car has shown the most speed since the restart.

Normally I don’t like the favorite when it comes to picking a winner; but when it comes to Atlanta, it’s hard to argue who’s been better. Harvick has won a stage in each of the last three races and has been the best driver the past two seasons on 1.5 tracks.

Harvick was on his way to another checkered flag earlier this season at Charlotte before his car fell off late in the race. He’s shown speed at Darlington as well winning race #1 and finishing 3rd in the race #2.

Looking back at his last three races here in Atlanta, he’s led 518 total laps and should be up front again this week. He’ll start 9th in the race, which should give him a shot at winning the first stage especially with competition cautions.

Logano nearly came away with a win last week in Bristol, but a late wreck with Chase Elliott ended his chances. He currently comes into this week as the playoff point’s leader and could improve on that, but he’ll likely have to beat out Harvick and his Penske teammates.

Looking at similar tracks, Logano has fared very well at places where tire wear is important. Logano has a win already this season in Las Vegas and another in Phoenix. Atlanta has always been a good track for the Penske Fords as his teammate, Brad Keselowski has proven that.

I expect Logano to be the next Ford contending for the win behind Harick. His odds to finish as the best Ford are (4/1) which is a pretty safe bet if you’re on the Chevrolets this week.

Hendrick Motorsports is getting all the hype since the restart, and they’ve shown the speed in each race. Johnson finished in the top-3 last week at Bristol and had a 2nd place finish in the Coca-Cola 600, but a failed inspection voided his result.

Before the Ford dominance, in the last three Atlanta races, Johnson won back-to-back races here in 2015 & 2016. Now that Johnson’s Chervolet have returned to form, NASCAR fans have been waiting for the #48 to return to victory lane; and we could see that this week.

Johnson’s odds at (18/1) could get shorter by Sunday, so you’ll likely see it closer to (15/1) or lower. I also like him for another top-5 this week, but you’ll likely get a better payoff with him as the Best Chevrolet.

The Toyotas have definitely been off so far this year. Jones’ teammates Kyle Busch and Martin Truex Jr are still winless and have not shown the same speed as the other two manufacturers.

Jones’ best finish this season was just last week at Bristol when he finished 5th place. Since the restart, Jones has been pretty consistent, posting three top-10 finishes in the five races. That consistency gives me faith he’ll be back in the front pack again this weekend.

Jones only win on a 1.5 mile track came last year in Darlington, and he’s only finished inside the too-10 once in his three career races in Atlanta. At his price of (28/1), it’s worth taking a shot based on his performance this year. His best bet would come from the Best Toyota prop. At odds (6.5/1), all Jones has to do is beat out his JGR teammates, which he’s capable of doing.

There’s an impressive group of rookie this season and one of those drivers is Tyler Reddick. In his five races since the restart, Reddick has record four top-15 finishes.

The 1.5 mile long tracks are in his wheelhouse and he seems to like riding the wall when it comes to this track. That could help him in Atlanta if he’s able to keep his car clear of damage.

He finished 5th in the Xfinity series in 2019, so a reasonable result in 2020 in the Cup Series should be expected. He’s a longshot so unless most of the favorites find themselves parked behind the wall, I don’t expect seeing him in victory lane.

Green flag for the Folds of Honor QuikTrip 500 is set for 2:25pm Central Time this Sunday. There will be two stages of 85 laps and a final stage of 155 laps for a total of 325 laps. It will be televised on FOX.