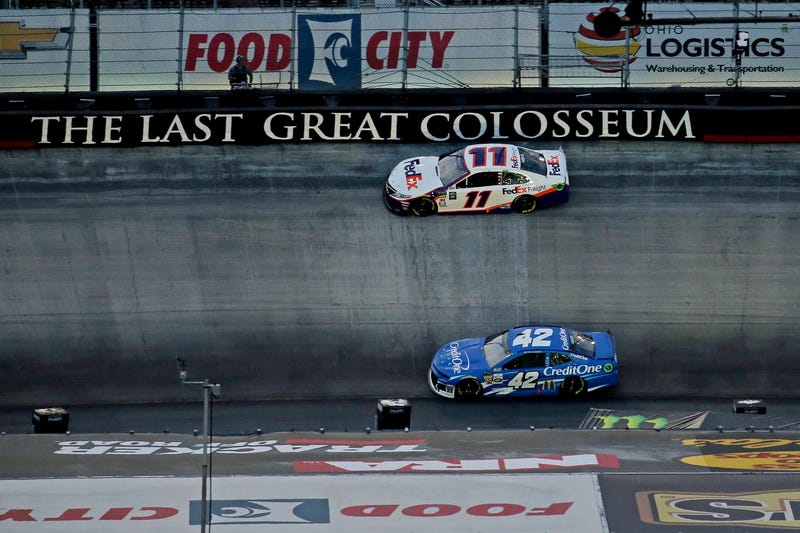 NASCAR heads to “The Last Great Colosseum” this Sunday, Bristol Motor Speedway for the 9th race of the season. So far in the month of May, we’ve seen four different winners; and we could likely see another this Sunday. Three of those drivers were mentioned in the past two WWL race articles (Hamlin, Keselowski & Elliott).

Bristol is one of the most popular tracks on the schedule due to its short track racing. The half-mile track will feature 500 laps this Sunday for the Food City 500. Bristol also gives us some of the best action as its smaller surface leads to more bumping and chaos.

When we look at drivers that stand out, we have to start with the 2019 champion Kyle Busch. He’s won the Food City 500 the past two seasons and is trying to become the 4th driver to win three straight. Those other three drivers include Darrell Waltrip, Jeff Gordon and his brother Kurt Busch.

Toyota has won four of the last five races in the Food City 500 with Jimmie Johnson getting a win in between. While they seem to be the favorite, Toyota hasn’t shown the race speed in 2020 like they have in year’s past.

Before we get to our picks, let’s hope that Sunday’s race turns out differently the past four. Rain has impacted almost every race since the restart and has caused some restless delays. As of Friday, weather should play no issues which is a good sight to see.

Like I mentioned earlier, KB is going for the trifecta this weekend and is the odds on favorite to do so. Busch comes in with four top-5 finishes this season, but he has yet to find victory lane in 2020. If you include the Bristol night race later in the season, Busch has four top-5 finishes in the last five Bristol races (3 wins).

Busch will come in determined as ever to get the monkey off his back in 2020, but there are still questions with the speed of the Toyotas. On talent alone, Busch is good enough to make his way to the front of any race, but there are still questions on whether anyone outside of Hamlin in JRG that can close stage three of a race. Busch’s odds come in a little short to bet so I’ll likely pass on him this week.

The Penske Fords showed some speed at Charlotte, and I think they will carry over to Bristol. Logano already has two wins this season and is currently first in the overall standings. Looking at past history, Logano has two wins at Bristol, both coming in the night race (2015 & 2014).

Logano earned a stage two win in last year’s race as well as the 2018 night race. So I expect the same from the #22 Ford getting up front and contending with his teammates, Ryan Blaney and Brad Keselowski.

The #22 comes in as the second best odds behind #18. I think that number is fair and should stick around that number. I think the other two Penske Fords have better value, but if you want to stick to the favorites, Logano and Kyle Busch will be your best options.

Blaney is my favorite pick this week, and sportsbooks have yet to adjust his number each week. The #12 car is coming into Bristol with back to back 3rd place finishes in the two Charlotte races. Other than Kyle Busch, no one has performed as well at Bristol in the past two seasons.

He has led over 100 laps or more in three of the four races and I think you’ll see the #12 have his best chance at victory lane. Penske was one of the hottest teams before the coronavirus pandemic but dropped off a bit at Darlington. Teammate Brad Keselowski got the win in the Coca-Cola 600, and I think you’ll see Blaney give Penske another win on the season.

His number at (16/1) will definitely drop before the race this Sunday. As we saw with William Byron, bettors will target a particular driver, and his number will fall. I expect to see Blaney’s odds drop to single digits by Sunday. Look for an 8/1 to 10/1 number, which is why his current number looks pretty nice.

One driver who’s looking for a change of scenery is the #14 car of Clint Bowyer. His performance at Charlotte was forgettable as he finished 39th and 16th in the two races. Bowyer has yet to finish inside the top-15 since the restart, but I think his luck will change this weekend.

Bristol is one of Bowyer’s favorite as he’s finished inside the top-10 in each of the last four races. That average finish ranks second best of all drivers within that period. The #14 car also has gotten off to fast starts with multiple top-3 stage one finishes.

Bowyer is more of a longshot to win with his odds, but he still should outperform other drivers. I like him to finish with a top-5, but don’t be afraid to look at a top-3 either. Odds (6/1).

Last year at Bristol, we almost saw our biggest longshot of the season pull off the victory when DiBenedetto finished 2nd to Denny Hamlin. Now the #21 car comes into this weekend after leading laps in both Charlotte races. DiBenedetto’s team Wood Brother’s Racing has an alliance with Penske Ford, so his car will be similar to Logano and Blaney.

The other longshot is rookie Christopher Bell. The #95 car has shown he can get results even in lesser equipment. He finished in the top-10 in the Coca-Cola 600 and has shown speed in his Toyota. Like DiBenedetto, Bell’s team has an alliance with a larger team in Joe Gibbs Racing.

Green flag is scheduled for 2:30pm Central Time on FS1. The race will feature three stages of 125, 125, and 250 laps. The Food City 500 has changed its name this year to the “Supermarket Heroes 500” to honor grocery store workers during the coronavirus pandemic.