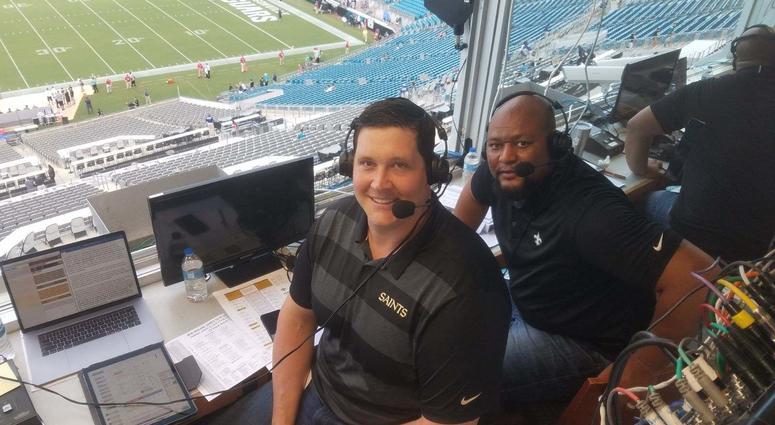 Saints Radio play-by-play man Zach Strief took to the airwaves Friday afternoon on WWL to offer a soothing voice of comfort to members of the Who Dat Nation who may be worried about the Black and Gold's Sunday night playoff tilt against the Eagles.

Strief and color analyst Deuce McAllister had been fielding calls and texts from fans who are nervous about the matchup. Strief attempted to allay those fears, saying it's OK to feel confident.

"I've been hearing this all day," Strief said. "First of all, me and Deuce don't have to play. We're allowed to eat all the cheese we want.

"All we're doing is watching what has occurred, what is happening, and trying to convey that. Now, any team can win a playoff game. Any team CAN win. You're in the playoffs. You're a good football team. Not every team SHOULD win every game that they're in. The Saints SHOULD win this game. That does not mean the Eagles CAN'T win this game. But there's a whole lot of things that play into the Saints' favor."

Strief went on to compare the two teams and offer reasons why he feels the way he does.

"I think you take rosters right now, the Saints have an advantage," Strief said. "You look at coaching. You could call it a tie. I think Doug Pederson's done a great job. I think Sean Payton's the greatest play-designer in the history of football, but let's call it a wash.

"Home-field advantage, right? Where the game is going to be played. Advantage to the Saints.

"Bye week last week. Rested. Healthier. There's all these reasons why the Saints have advantages in this game. There's not a lot of reasons the Eagles would have an advantage."

Strief said the biggest reason Philly might have for an upset in the Superdome should be negated by the Black and Gold.

"If there's an advantage for the Eagles, it's mojo," Strief said. "They THINK that they can win right now. I'll tell you right now. There's no issues with confidence in the Saints' locker room. Those guys expect to go out and play their best game of the season."

"Trust me, [the Saints] have heard the things that are being said about them," McAllister said. "Not to say that that is an added piece as far as motivation. I think they want to go out and prove that they're the #1 seed for a reason."

Strief closed the segment by once again reminding longtime fans that those "sky is falling" days are in the distant past for this franchise.

"I've gotten a lot of people saying, 'I spent years watching the Saints find ways to lose games.' I don't have that history here," Strief said. "I wasn't around when there were bags on people's heads. So I don't know that part of this history. I know this roster though. This roster is going to be revved up and ready to go."

The NFC's top-seeded New Orleans Saints host the #6 Philadelphia Eagles Sunday at 3:40pm on WWL. Our pregame coverage starts at 11am.