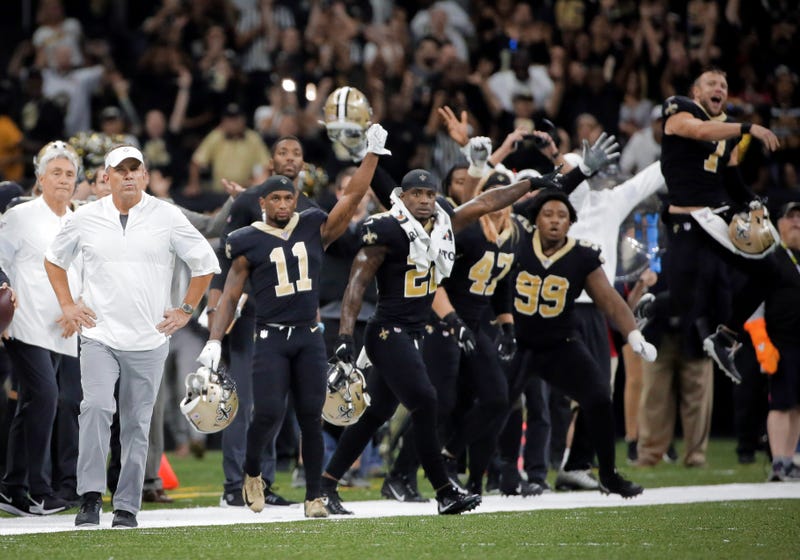 For the first 2 quarters we watched a football game in the Superdome defined by missed opportunity.  The Saints started the game 0-2 in the redzone with a turnover and a field goal and watched as the Texans started to heat up, driving the ball down the field twice to score touchdowns.  While there were some big surprises defensively, the Texans looked like the offense they were last year, efficient and balanced, and Deshaun Watson looked like the star in the making he is.The Saints surrendered more yards rushing in the first half (85), than they gave up a game (80) in 2018.  The stat line was very close between the two teams at half, but the score was not.  The Saints went to the locker room down 14-3, after a failed 56 yard field goal attempt created by yet another baffling officiating error, this time, all the way from New York.  Clearly the correct message was shared at half, because the correct team came out after halftime. The offense got the ball to start the half and got exactly what they needed in their first drive out.  The Saints went 83 yards in 5 plays and Latavius Murray gets his first TD as a Saint on a 30 yard run to narrow the score to 14-10.  Unfortunately, that was quickly squandered as the Texans responded immediately with a drive of their own, their third consecutive TD drive in the game.It was clear, however, that the Texans had no answers for the Saints offense.  Their next drive for a TD, this time a pass to Taysom Hill, gave the Saints the momentum back and the defense fed off it.  Their first stop in 4 possessions came by the hands of Marcus Williams and his spectacular INT that showed the range and ball-hawking ability, that made him a 2nd round pick of the Saints in 2017. Finally, the Saints broke through the score board barrier in the 4th quarter grabbing their first lead of the game on Tre’quan Smith’s 14-yard grab.  The end of this game saw Wil Lutz kicking two field goals in the final 50 seconds. The Texans went on a two play 75-yard drive to take the lead back.  A missed extra point kept the game a tie, then was overturned by a roughing the kicker penalty by C.J. Gardner Johnson.  Setting up Drew Brees’ 35-yard drive to get the Saints inside the range of Wil Lutz, who kicked a career long game winner of 58 yards.  Exhale.  Other than that, this was a pretty ho hum victory…What we saw in the dome last night was a team, early in a season, experiencing the type of internal growth that a Super Bowl championship team requires.  All rosters, each year, go through a string of experiences that made up the psyche of a team.  Wins like this, wins that appear unlikely at a point, wins that require all phases of the team to make plays when they are needed, come back to pay big dividends as the season goes on.It’s hard to explain, but the great teams I played on got to a point when there was no doubt in anyone’s minds on the sideline that somebody would make the play that had to be made to win a game.  Every player walked onto the field, in the biggest moments with confidence, that the outcome would bend our way. Having that happen in week one, before a 2-game west coast tilt against two contenders, is invaluable.  Those games will both be close and come down to the same types of situations that you saw in the Superdome last night.  For these players to feel that in week one will pay off in a big way.  In the same light, it would have made things harder defensively moving forward to know, that you gave up 75 yards in 2 plays to give up the lead with 37 seconds left.  It can take weeks to shake those types of mental breakdowns from your entire roster.  Maybe some of your vets have learned to shake it in a week, but your young players have not.  Doubt, more than anything else, is destructive on a football field. The Saints 30-28 win on opening night brought the excitement of football rushing back to all of us in one fell swoop.  My partner Deuce said it best.  “That’s too much excitement for the first week, I didn’t need that much excitement.”  Sometimes it’s more comfortable to win running away.  I hear often disappointment in a game that there are failures in one phase or another, that the win wasn’t “clean.”  I understand the sentiment; I just don’t agree with it.  It’s hard to win games in the National Football League.  Hard to win against playoff teams, which the Texans will be.  It’s also hard to build the psyche of a championship team. Yesterday’s game accomplished everything you could have wanted it to.  Enough positive to walk away feeling the future is bright.  Enough negative for the coaches to push harder this week at practice.  Enough big moments for young players to grow, to understand what it takes to win in this league.  Enough excitement to raise Deuce’s blood pressure.  Enough points, to get the first win of the season.  Football is back New Orleans.