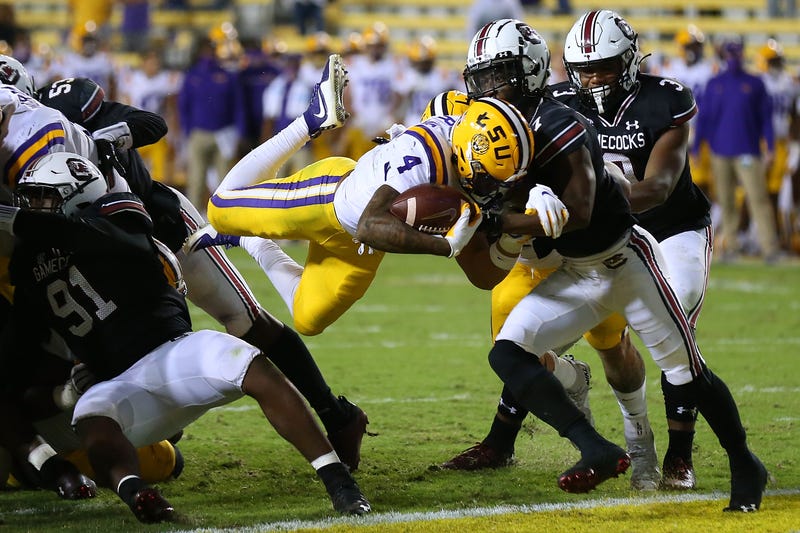 There were a lot of questions heading into LSU’s matchup against South Carolina. Could the LSU defense get things together after another embarrassing performance two weeks ago against Missouri? Would the LSU offense struggle with a true freshman quarterback making his first ever collegiate start?

Those questions were answered and some answers remain the same after LSU’s 52-24 win over Gamecocks in Tiger Stadium. TJ Finley didn’t look like a quarterback making his first ever start. Finley led the offense for over 500 yards with four drives ending in touchdowns. Although the defense did get a defensive score by cornerback Elias Ricks, it was more of the same from the LSU secondary. The Gamecocks were able to put up over 400 yards of total offense on the Tigers.

Finley finished the night passing for 265 yards completing 17 of his 21 passes. More importantly, the Tigers were 8 for 10 on 3rd down, which is a key stat LSU struggled with in their two losses. The freshman definitely caught the eye of plenty of Tiger fans. He even scored a “T-J Fin-ley” chant from the LSU student section in the 2nd half.

While I think Finley’s performance was superb, I still believe this is Myles Brennan’s team when he returns to the field next week. I think Coach O can feel confident enough to have multiple play packages available, if he wants to get both quarterbacks involved in the game.

Another star of the game was Finley’s pass catcher, WR Terrace Marshall Jr.. Marshall continues to be LSU’s best offensive weapon. He scored in seven straight games going back to last season, and now has seven touchdowns this season. Marshall ended Saturday night with 88 yards and two touchdowns.

Finally, as much criticism as the LSU defense has gotten this year, the defensive pass rush played its best game of the year. The Tigers finished the night with five sacks and three of those were from freshman BJ Ojulari.

One of the biggest issues resulting in the Tigers’ poor performance has been the discipline of this team. LSU committed way too many penalties even in a blowout win. Ten penalties for 79 yards, and most of those flags were before the ball was snapped or defensive interference.

I’m not sure if this is a coaching issue or just the inexperience of a young team. There’s a lack of communication and discipline, which has led to big plays from opposing teams. This could also just be a leadership issue with so many big names departed from LSU’s national championship roster and locker room. Whatever the issue may be, the Tigers will need to grow up quickly to take on the big boys of the SEC in their remaining schedule.

With two weeks to prepare and make adjustments, the LSU secondary continued where they left off against Missouri and Mississippi State, allowing big play after big play. South Carolina’s opening play went to a wide open receiver for 36 yards. Seven plays by the Gamecocks’ offense went for 20 yards or more. South Carolina QB Collin Hill averaged 19.5 yards per completion on the night.

While Hill’s stats may look off the charts on paper, most of his yards were from blown coverages and bad assignments from LSU’s defensive backfield. SC tight end Keveon Mullins finished the night with two catches for over 100 yards. If not for an injury in the 3rd quarter it could have been more.

One area that the defense was able to fix this week was 3rd down. The Gamecocks finished the game 3 for 10 on 3rd down. Even though the Tigers defense allowed big plays, they were able to limit South Carolina’s scoring, because they got stops when needed.

The Tigers will face an experienced quarterback next week in Auburn’s Bo Nix. I think the LSU offense will continue to keep the Tigers in games, but eventually questions surrounding the progress of the defense will need to be answered or the Tigers may be finding themselves questioning the validity of DBU.