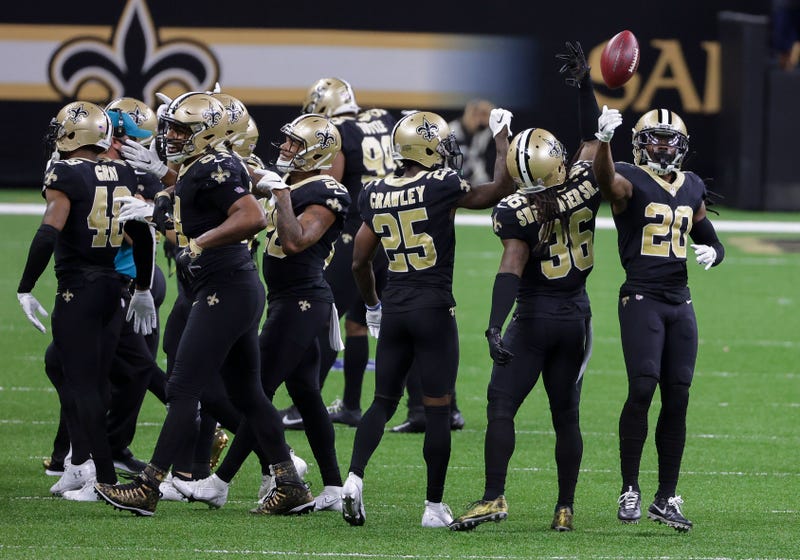 The lead in the NFC changed hands once again after Week 11, as did the mantle for front-runner in the NFC West. And there was lots of shuffling of the wild-card deck.

Green Bay’s overtime loss to the Colts didn’t hurt them much in the division other than giving back a half-game to the idle Bears, since the Vikings also lost to Dallas.

As it stands, Chicago sits 2 games back, with Minnesota and Detroit both 3 games back.

The Vikings hold the head-to-head tiebreaker over the Lions after beating Detroit in Week 9.

Another week, another change at the top of the tight NFC West. Seattle had the early lead after beating Arizona on Thursday night, but the Rams made up the ground when they closed out the weekend with a Monday night win over the Buccaneers. The tie at the top is settled by the Rams’ Week 10 win over the Seahawks. They’ll play again in Week 16.

The Cardinals’ Thursday night setback leaves them 1 game back. The 49ers sat idle and now trail by 3 games.

Philly’s loss to the Browns, Washington’s win over Cincinnati, and the Cowboys’ victory over Minnesota lined up with the Giants’ bye week to ensure everyone in the East has EXACTLY three wins… 11 weeks into the season.

The Eagles retain the lead by a half-game thanks to their tie with Cincinnati back in Week 3.

The other three teams are just a half-game back, and divisional record is the tiebreaker:

Somehow, this division remains up for grabs for all four teams. Does anyone want to win it? We’ve got six more weeks to find out.

Taysom Time in New Orleans might have been the headline heading into the weekend, but the top story of the Saints’ lopsided win over the Falcons was far and away the dominance of the Fleur De Lis D. Meanwhile, Carolina somehow ended their five-game skid with both Teddy Bridgewater and Christian McCaffrey sidelined, shutting out Detroit. And Tampa faltered again in primetime, getting dropped by the Rams on Monday night.

The Bucs now sit 1 ½ games behind the Saints, who also swept Tampa this season for the head-to-head tiebreaker. The Panthers sit 4 ½ games back while Atlanta trails by 5 games with six to play.

Green Bay’s loss to Indy opened the door for the Drew Brees-less Saints to elevate back to the top spot, and they eagerly grabbed that opportunity by winning their seventh straight.

The Pack meanwhile dropped into a tie with the newly-minted West-leading Rams, who have a better conference record: 7-1 compared to the Packers’ 5-2 mark.

I am obligated to mention that Philadelphia sits 4 ½ games out of the conference lead.

Seattle leads the wild-card race in the NFC with Tampa Bay just a half-game back. The Cardinals took the biggest drop, losing their lead atop the West and falling all the way to the final wild-card spot, 1 full game behind the Seahawks.

The Bears remain in the picture for now, trailing Arizona for the final wild-card spot by 1 game.

Minnesota and Detroit are separated by divisional tiebreakers, and both have a better conference record than San Francisco: Minnesota (3-4) | Detroit (3-5) | San Francisco (2-5)

ELIMINATED
We remain at least a couple of weeks away from knocking anyone out of the NFC wild-card picture. Even the teams in the East.

Pittsburgh had one of the most ho-hum 24-point wins in history, just casually routing the Jaguars to move to 10-0 for the first time in team history.

The bigger news in the North was that, with the Browns’ defensive beatdown of the Eagles and the Ravens’ overtime loss to the Titans, Cleveland overtook Baltimore for second place, sitting 3 games behind the Steelers while the Ravens sit 4 games back.

As for Cincinnati, it was a rough week to be a Bengals fan as they lost their game against Washington, their rookie quarterback Joe Burrow for perhaps a year with two torn ligaments in his knee, and suffered complete mathematical elimination in the AFC North, falling to 7 ½ games out of first with just six to play.

The Chiefs’ Sunday night win over the Raiders may prove to be the lynchpin in locking down another crown in the West. The victory evened up the season series and avenged KC’s only loss of the season.

It also put 3 games between them and the second-place Raiders with six games left, meaning Vegas is running out of time to catch up and may have let their last best chance slip away.

The Broncos and Chargers, at 5 and 6 games back respectively, could both be out of the race as soon as next week.

Buffalo enjoyed a very advantageous week of rest, watching both the Fins and Pats fall as they sat back on Sunday with their bye week.

The Bills’ half-game lead over Miami therefore stretched to a full game, and they already own a win over the Dolphins from back in Week 2. The rematch during the season’s final week may very well be the NFL’s choice to flex into primetime if that 1-game gap holds steady.

The Patriots are now 3 games back, and it certainly looks like their 11-season run at the top is in its death throes. They’ll need a miracle at this point to make that ground up in just six weeks, especially considering they’d have to go straight from losing to the dysfunctional Texans to running the table the rest of the way.

New York was eliminated in Week 9.

Both the Colts and Titans enjoyed overtime victories this week, with Indy knocking off Green Bay and Tennessee taking down Baltimore, leaving the two teams tied for the lead in the South and the Colts’ Week 10 head-to-head win over the Titans still serving as the tiebreaker.

That could change this Sunday, when the two teams play the rematch, their second meeting in three weeks.

Houston’s win over the Patriots kept them 4 games back while the Jaguars fell to 6 games back with a loss to the unbeaten Steelers. Jacksonville will almost certainly be eliminated by this time next week.

The Steelers won again to hold off the Chiefs for another week. KC remains 1 game back.

The Bills and Colts both now sit 3 games back with Indy pulling into a tie with Buffalo thanks to the Bills’ bye week. The tiebreaker comes down to conference record: Buffalo is 5-2 against the AFC. Indianapolis is 3-3.

The AFC Wild Card logjam loosened up a bit this week, with two separate ties now existing for the three available spots.

At the top sit the Titans and Browns, who were both on the outside looking in a week ago. Funny how one week can change the whole game. Conference record separates them with Tennessee at 5-3 and Cleveland at 4-3.

Three teams trail those two by 1 game, and are tied for the final playoff spot. Conference record gives the Raiders the edge at 4-3, while both the Ravens and Dolphins are dead even at 4-4 and 3-3 respectively.

ELIMINATED
No one has been eliminated yet.

Hopefully you’re eating late on Thanksgiving because the first two games – Detroit-Houston and Dallas-Washington – could definitely cause indigestion. But the nightcap between the Ravens and unbeaten Steelers should be a physical matchup, and a second loss to Pittsburgh would likely lock Baltimore out of the divisional race.

Indianapolis and Tennessee play for the second time in three weeks, and once again the winner will control the AFC South.

The Chiefs visit the Buccaneers for a marquis QB matchup between a future Hall of Famer and the new face of the NFL.

Philly still leads the NFC East for now, so their Monday night matchup against Seattle could potentially be a playoff preview.