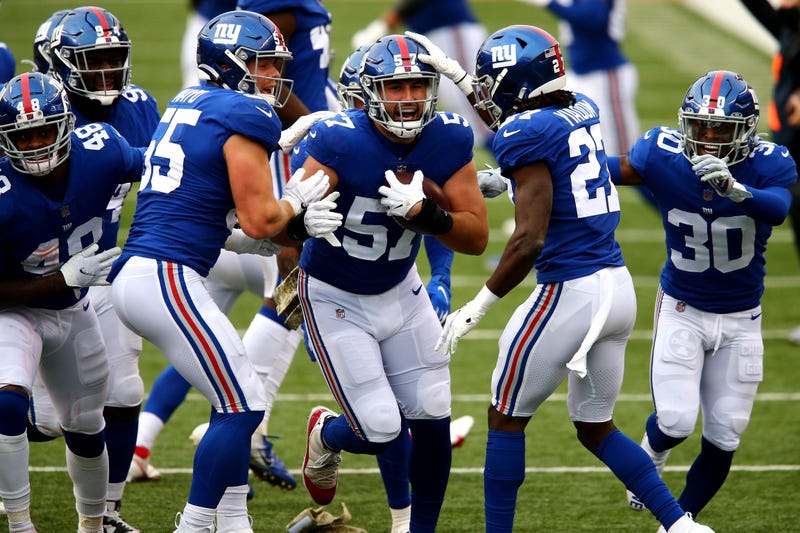 The 4-7 Giants are this week's best of the worst in the NFC East. Photo credit Kareem Elgazzar/The Enquirer via Imagn Content Services, LLC
By Mark Menard

Three divisions have new leaders and the wild-card race in the AFC continues to shift.

The Pack’s beatdown of the Bears continued Chicago’s downward spiral. They’ve lost five straight since their 5-1 start. They now sit tied with the Vikings at 3 games behind Green Bay, and Minnesota has the head-to-head tiebreaker for second place after beating the Bears in Week 10.

Detroit sits 4 games back and is on the verge of elimination.

Seattle’s Monday night win over the Eagles pushed them back into the lead in the West after the Rams faltered against the 49ers on Sunday. The Seahawks have a 1 game lead over L.A.

Arizona trails by 2 games, and San Francisco continues to inch back into the race, though they remain a long-shot at 3 games back.

Washington grabbed the early lead this week with their Thanksgiving day win over Dallas, but the Giants pulled ahead by beating the Bengals. The G-Men have just four wins on the year, but two of those have come at the expense of Washington, giving them the season sweep and the head-to-head tiebreaker.

The Eagles’ Monday night loss pushed them to a ½ game back of both NY and DC. And even at 3-8, the Cowboys only sit 1 game out of the lead in the East. What a year.

While the Saints got the good fortune of playing a Broncos team without a true quarterback, the Bucs continued to trudge through the toughest part of the year, losing for the third time in four games. Their defeat at the hands of the Super Bowl champion Chiefs pushed Tampa into a 2 ½ game deficit behind the Saints, who also hold the head-to-head tiebreaker. Atlanta’s time is rapidly running out. They trail New Orleans by 5 with five to play, though the uncertainty of certain tiebreakers keep them alive.

Carolina meanwhile finds themselves officially out of the divisional chase for this year, sitting 5 ½ back with just five to play.

New Orleans holds their lead atop the NFC, leading two of the other three division leaders by 1 game.

The Seahawks and Packers are both hot on the Saints’ heels, with Seattle holding the advantage over Green Bay by virtue of strength-of-victory. Seattle: 38-49-1; Green Bay: 37-51.

The Giants now lead the NFC East and sit 5 games out of the conference lead.

Only 1 game separates the top (Rams) and bottom (Cardinals) wild-card teams in the NFC, with the Buccaneers sandwiched right in the middle at a ½ game behind L.A.

The Vikings, Bears and 49ers all sit below .500 but just 1 game out of the bottom wild-card spot. Divisional tiebreakers separate Minnesota and Chicago, but both have better conference records than San Fran:

Detroit and Washington both sit at 3-5 in conference play compared to Atlanta at 2-7). From there, the Lions beat Washington for the head-to-head tiebreaker in Week 10.

ELIMINATED
The entirety of the NFC remains alive for now.

I think most thought this might come down to a two-team race, but not many thought one of those teams would be the Browns. The Ravens are right at the brink at 5 games back with 5 to play AND having been swept by the Steelers. Their only hope rests on some kind of three-way tie with the Browns involved, but even that is slim with the Browns sitting 3 games back at the moment.

Pittsburgh just about has this thing sewn up and still haven’t so much as lost a game. Their aspirations will officially be set higher than division glory very, very soon.

Cincinnati was eliminated in Week 12.

As they look to defend the world championship, the Chiefs obviously have legit ambitions for the deepest of playoff runs, but winning the AFC West is still an accomplishment to be proud of, and KC is closing in on doing just that after their win over Tampa and the Raiders’ shocking blowout loss in Atlanta.

The Raiders now trail by 4 games with just 5 to play, meaning KC could salt away the West as early as this weekend.

With Denver and Los Angeles now 6 and 7 games back respectively with just five games left to play, they are both officially eliminated from the divisional race.

With Buffalo’s win over the Chargers and Miami’s comfortable victory over the Jets, the season-ending Bills-Dolphins matchup continues to loom as Buffalo retains a 1 game lead over the Fins.

But the Patriots continue to lurk 3 games back, hoping for a miracle.

New York was eliminated in Week 9.

What a difference two weeks can make.

Two weeks ago, it was the Colts looking strong as they knocked off the Titans and took over the lead in the South. But in the rematch, it was all Tennessee, to the tune of a 45-26 rout on the back of Derrick Henry.

Now the division once again runs through Nashville with the Colts trailing the Titans by 1 game. The Texans sit 4 games back to five to play and could be out of it by next week at this time.

Jacksonville has been put out of their misery in this year’s division race and sit 7 games out.

The Titans retook the lead in the AFC South and pulled into a tie with the East-leading Bills. Tennessee’s Week 5 win over Buffalo gives them the head-to-head tiebreaker.

Cleveland… yes, THAT Cleveland… moved to the top of the wild-card pack this week, leading by 1 game over the nearest competition. The Dolphins and Colts are tied behind them but both would get in at the moment. Miami holds the edge over Indy due to conference record, 4-3 vs. 3-4.

This week finds the Raiders and Ravens on the outside looking in, trailing the bottom wild-card teams by 1 game. Vegas has a better conference record (4-3) than Baltimore (4-5).

Jacksonville and New York are free to battle for the #1 draft pick, but their playoff hopes are officially over.

Tennessee hosts Cleveland in what could end up a playoff preview when all is said and done.

San Francisco hosts Buffalo on Monday night as the Niners try to claw their way back to .500.