Many changes are expected at Walt Disney World when the park gates reopen on July 11, 2020.

As part of the phased reopening, Magic Kingdom and Animal Kingdom will reopen first on Saturday, followed by Epcot and Hollywood Studios on Wednesday.

All parks will follow guidelines from the CDC and will include safety protocols, social distancing, and enhanced cleaning, per the Walt Disney World website.

Face masks will be required for all guests 2 and older, fingerprint scanners will not be used, and seats will be left empty on rides. Guests will also be encouraged to wash and sanitize their hands frequently.

While the park and its cast members are ready to give you a magical experience, some attractions and experiences including parades and fireworks will either be limited or on hiatus. 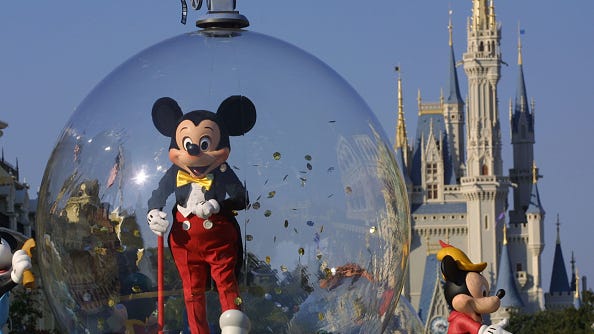 With an emphasis on reduced contact, this means that traditional character meet and greets are also canceled for the time being and will look slightly different when Mickey Mouse and friends decide to meet fans again.

However, that doesn't mean guests won't be able to see their favorite characters at all. “Good Morning America” revealed the park’s plan for costumed character greetings amid the pandemic. Check out the new plans below:

- Throughout the day, Disney princesses like Princess Merida, Cinderella, Belle, Jasmine, Snow White, and more will make their way through the streets of their Magic Kingdom waving to guests.

- Mickey Mouse, Minnie Mouse and other friends will walk the parade route and wave to guess while inviting them to “Get Their Ears On.”

- Guests on the Discovery River Character Cruise will see “Lion King”s Timon and Rafiki or Pocahontas.

- Donald Duck, Daisy Duck and Launchpad McQuack will wave to guests from their party boat as “Donald’s Dino Bash!” takes to the water.

- Discovery Island Drummers will be cruising along the Discovery River playing music for visitors.

- Minnie Mouse, Mickey Mouse, Pluto, and Goofy will be making their way around the World Showcase in Epcot.

- Queen Elsa and Anna will journey from country to country saying hello to visitors from all over.

- "Star Wars: Galaxy's Edge": As guests explore Black Spire Outpost on the planet Batuu, they will likely run into some familiar faces.

- You’re being watched. Rey, Chewbacca, and Vi Moradi may be seen on the platforms above the garage in Black Spire Station keeping tabs on activity.

- All your favorite friends from Pixar films including “The Incredibles” and “Toy Story” will be roaming Hollywood Boulevard to greet guests.

- Fans will have a chance to see Disney Junior stars Fancy Nancy, Doc McStuffins and Vampirina making their way down Hollywood Boulevard.