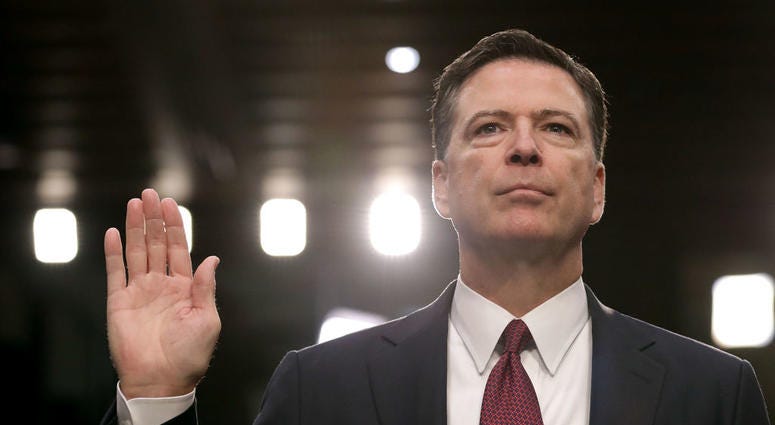 CLICK HERE: TO LISTEN LIVE TO AN EXCLUSIVE IN-DEPTH INTERVIEW WITH JAMES COMEY -- FRIDAY MAY 3 AT 1 PM PST*

Comey was appointed by President Barack Obama in 2013. He was the 7th Director of the FBI.

In May of 2017, he was fired by President Trump amid a storm of politics surrounding Russia's collusion during Trump's 2016 election.

Comey, 58, penned an op-ed in the New York Times May 1, essentially accusing Trump’s appointees of making “compromises” to survive their boss.

The op-ed was published on the same day Attorney General William Barr was grilled during a Senate hearing on his summary of the Robert Mueller report.

"Accomplished people lacking inner strength can't resist the compromises necessary to survive Mr. Trump and that adds up to something they will never recover from," Comey wrote in the Times. "It takes character like (former Secretary of Defense James) Mattis's to avoid the damage because Mr. Trump eats your soul in small bites."

Prior to his service in the FBI, Comey worked as a federal prosecutor in New York and Virginia, and as the U.S. attorney for the Southern District of New York and the U.S. deputy attorney general in President George W. Bush’s administration.

Comey’s book, “A Higher Loyalty: Truth, Lies, and Leadership,” was published in April 2018. The New York Times described it as “impassioned.”

“We are experiencing a dangerous time in our country,” Comey writes, “with a political environment where basic facts are disputed, fundamental truth is questioned, lying is normalized and unethical behavior is ignored, excused or rewarded.”

Comey is married to Patrice Failor, and they have five children.