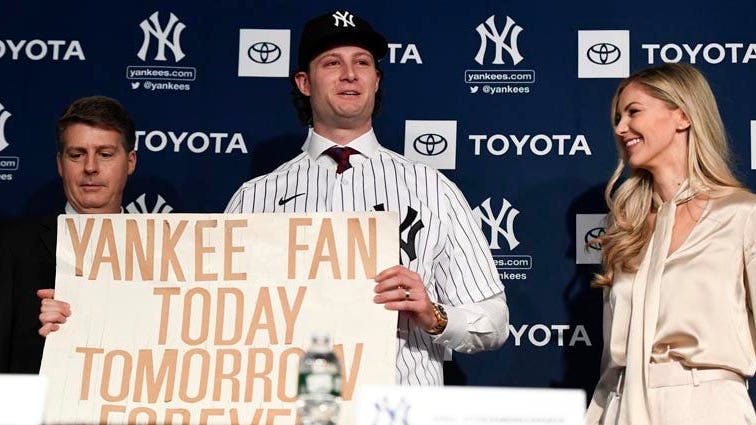 The Major League Baseball Players Association has filed a grievance against the New York Yankees in an attempt to regain the remaining $26 million due released outfielder Jacoby Ellsbury.

The grievance was disclosed to The Associated Press by a person familiar with the process who spoke on condition of anonymity because no announcement was made. Barring a settlement, the grievance will be heard by arbitrator Mark Irvings.
Kim Klement-USA TODAY Sports

New York converted Ellsbury's $153 million, seven-year contract to non-guaranteed, contending he violated the deal by getting unauthorized medical treatment, then released the 36-year-old outfielder on Nov. 20. The Yankees said he was treated by Dr. Viktor Bouquette of Progressive Medical Center in Atlanta without the team’s permission.

Ellsbury contends any treatment he received without authorization was for a non-baseball-related injury or condition, which does not require the club's consent.

New York's projected payroll is just at the $248 million threshold where the highest luxury tax rate starts. and Ellsbury accounts for roughly $21.9 million of the Yankees’ tax payroll. New York will pay 30% on the amount above $208 million through $228 million, 42% on the next $20 million and 75% on the amount above $248 million. If the Yankees exceed $248 million, their top pick in the 2021 amateur draft would be moved back 10 places.

Ellsbury hit .264 with 39 homers, 198 RBIs and 102 stolen bases in 520 games in six seasons with the Yankees. He injured a muscle in his right side early during spring training in 2018, developed a bad back and had surgery that Aug. 6 to repair a torn labrum in his left hip. He experienced plantar fasciitis in his right foot during his rehab program before spring training this year.

Irvings is expected to decide next month on the union's grievance against the Chicago Cubs over Kris Bryant. The third baseman debuted on April 17, 2015, leaving him one day shy of the service time needed to become a free agent after the 2020 season. Bryant contends he was held in the minors in a deliberate effort to delay his free-agent eligibility.