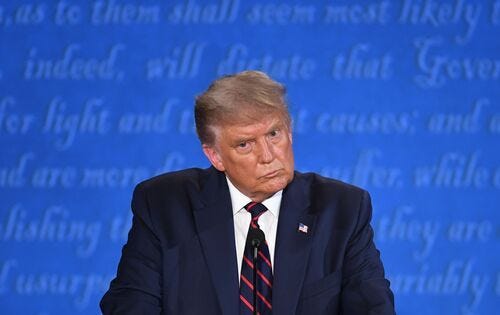 WASHINGTON — President Donald Trump danced around a question from moderator Chris Wallace about whether he was willing to condemn white supremacists and militia groups.

“I would say almost everything I see is from the left wing, not the right wing,” Trump responded. “I’m willing to do anything. I want to see peace.”
When pressed further, Trump said, “What do you want to call them? Give me a name. Give me a name?”

It was Biden who said, "Proud Boys" into the microphone.

Then Trump said, “Proud Boys — Stand back, stand by, but I’ll tell you what, somebody’s got to do something about Antifa and the left because this is not right-wing problem..... This is a left wing problem."

Trump infamously said there were good people “on both sides” after a white supremacist rally in Charlottesville, Virginia, that led to the death of a counterprotester.