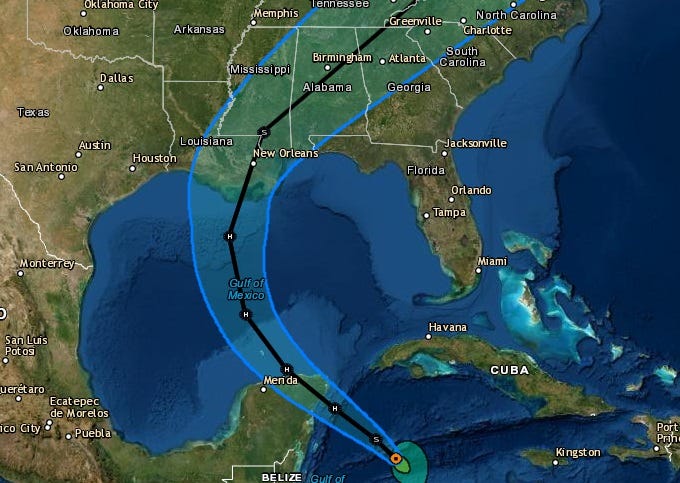 Tropical Storm Zeta is forecast to hit Mexico's Yucatan peninsula Tuesday as a hurricane, then head for somewhere between Louisiana and Florida by Wednesday afternoon. The New Orleans area is now in the middle of the forecast cone.

"Maximum sustained winds are near 60 mph with higher gusts," the National Hurricane Center advised Sunday night. "Strengthening is forecast, and Zeta is expected to become a hurricane before it moves near or over the Yucatan Peninsula late Monday."

Where it hits the US Gulf Coast, the system is expected to be a tropical storm or category one hurricane.

The Hurricane Center says once Zeta moves off of Mexico, it will face challenges getting stronger in the Gulf.  That's why the system is currently not expected to intensify as it approaches the United States.

"After Zeta moves into the Gulf of Mexico, southwesterly shear is likely to increase," Senior Hurricane Specialist Richard Pasch explained. "Oceanic heat content below the cyclone will diminish, especially when the system approaches the northern Gulf coast on Wednesday."

He says for both of those reason no strengthening is forecast close to the coast.  Pasch notes that could change.

"Zeta could be weakening by the time it reaches the northern Gulf coast.  However, the intensity forecast is still subject to significant uncertainty."

The forecast calls for Southeast Louisiana to see up to four inches of rain, with isolated higher amounts up to six inches.

"The expected rainfall could lead to flash flooding and minor river flooding."