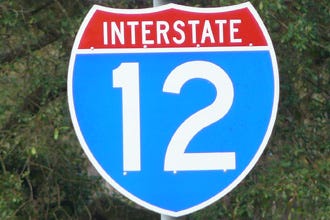 There was a fiery explosion on the I-12 at the Walker exit.

State Police say a tanker blew up in a crash that involved a state trooper.

The trooper is one of two people reportedly injured. State Police say the trooper and the truck driver have "moderate" injuries.

The crash happened as the state police officer was stopped on the shoulder with blue flashing lights. Investigators say the truck driver slammed into the back of the police vehicle, sparking the explosion.

Hazardous materials crews are on the scene.

I-12 was closed eastbound at Walker. The explosion happened just before 5:00am.

#BREAKING: I-12 east is CLOSED at Walker due to a tanker truck explosion near Satsuma. We're working to learn more about what the truck was carrying. No word yet on potential injuries. @WAFB @WAFBTraffic Video courtesy Laura Kimbrell pic.twitter.com/2EFMjyIbx5