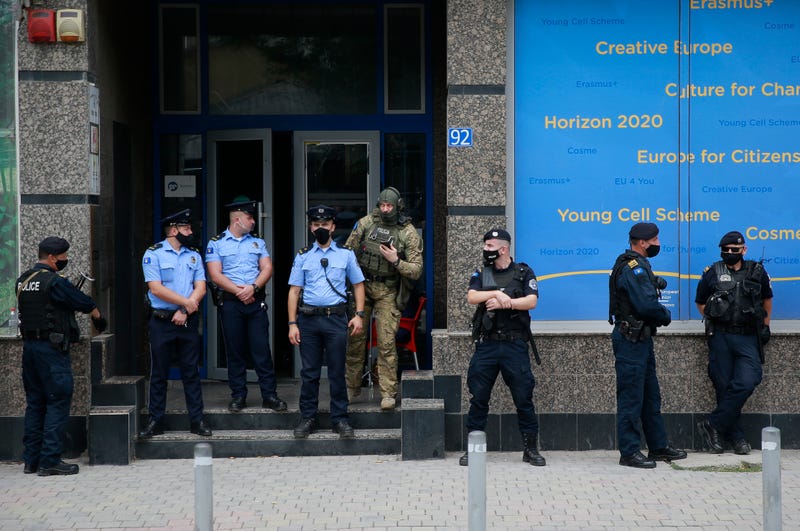 THE HAGUE, Netherlands (AP) — The deputy head of an association of Kosovo war veterans who was arrested last week on suspicion of offenses including intimidating witnesses said Tuesday he did not recognize the jurisdiction of the internationally funded court that ordered his detention.

Nasim Haradinaj was not required to enter a plea at his first appearance before the Kosovo Specialist Chambers in The Hague as prosecutors have not yet filed an indictment.

His Dutch lawyer, Bas Martens, told a brief hearing that he had filed motions seeking Haradinaj's immediate release from pretrial detention and challenging the court's jurisdiction.

Prosecutors allege that Haradinaj endangered potential witnesses in war crimes cases they are investigating by releasing their names publicly.

Haradinaj and the leader of the Kosovo war veterans association were both arrested last week. The head of the association, Hysni Gucati, is to make his first appearance before a pretrial judge on Thursday.

Both men were arrested on suspicion of “offences against the administration of justice."

The Hague-based special court is investigating war crimes and crimes against humanity linked to the conflict. The first war crimes suspect indicted by the court, Salih Mustafa, appeared in the same courtroom on Monday charged with offenses including torture and murder.

Last week, the war veterans group said for the third time in two months an unknown person had provided war crime files from prosecutors in The Hague. The veterans said they would make the files public.

Specialist Prosecutor’s Office spokesman Christopher Bennett said releasing the documents would be “undermining the proper administration of justice” and making them public was a criminal act.

Kosovo's war for independence from Serbia left more than 10,000 people dead — most of them ethnic Albanians from Kosovo. More than 1,600 people still remain unaccounted for. NATO air strikes against Serbian forces ended the conflict.