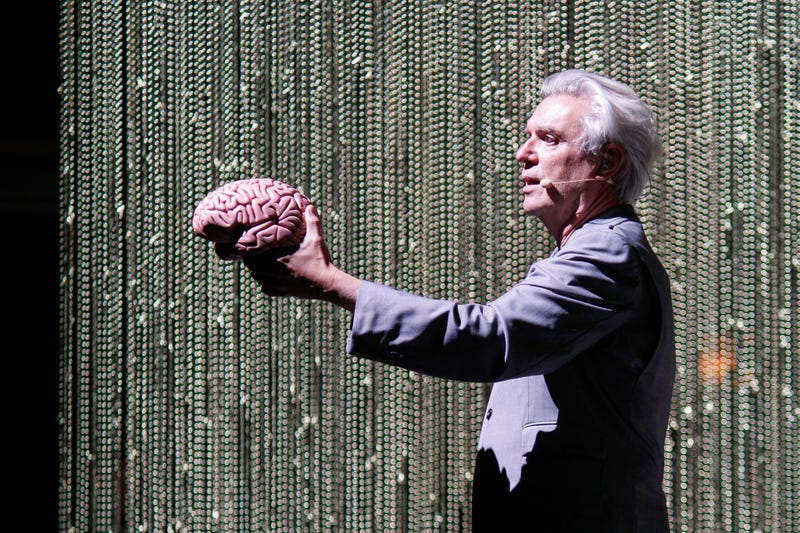 Do you know what the duck said when he bought a tube of lipstick?

In 1984, projected on the silver screen, David Byrne stepped onstage solo to sing “Psycho Killer” before he was joined by more and more Talking Heads band members for each subsequent song. That was Stop Making Sense, the landmark Jonathan Demme rockumentary. And now, nearly four decades later, Byrne’s playful sense of performance has taken him to Broadway for his show American Utopia, which he also brought on tour to Chicago last June.
Inspired in part by color guard performances (which Byrne splotlighted in a 2017 documentary Contemporary Color), American Utopia features choreographed barefoot dancing and classic Talking Heads tunes. From the release of the first Talking Heads' album in 1977 to today, Byrne’s singular weirdness has attracted fans far and wide, including, apparently, many comedians. “A lot of funny people have been coming,” related Byrne in an interview on Seth Meyers’ Late Night.

Evidently, one such funny person was Jerry Seinfeld, who even shared a note with Byrne on a joke he had told during the Broadway show. “You can’t put the joke in the middle of a sentence,” said Seinfeld, according to Byrne. “The joke has to come at the end.”

The duck said: “Put in on my bill”