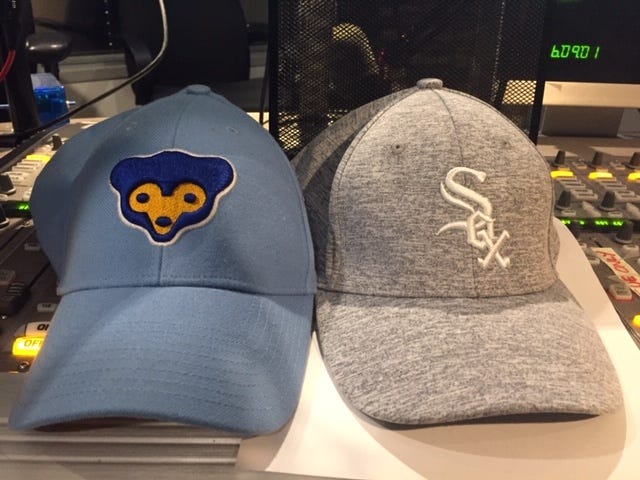 Torn from the frayed pages of Lin’s Bin

Ian of Forest Park writes, Growing up as a Cubs fan in the south burbs, I wonder can you be a fan of both teams?

The White Sox World Series Championship is still so fresh in my mind that it seems like yesterday.

Manager Ozzie Guillen throwing his arms wide to signal to the bullpen that he wants extra-wide closer Bobby Jenks to come in the game.

That unlikely moment when Scotty Pods hit a walk off home run in Game 2.

The White Sox dominated the post-season and I went to almost every home playoff game that year.

Now I understand how some of you suffered the slings and arrows of outrageous rivalry. Sox fans that needled Cub fans in the schoolyard. Cub fans that denigrated The White Sox in the lunchroom. You may carry that ill-will into adulthood, but we are allowed to let it go and enjoy baseball for its own sake. To take up the cause of The Boston Red Sox against the New York Mets in 86. To root for the Minnesota Twins against the tomahawk chopping Atlanta Braves in 91.

Too often, we are told what we are permitted to like. You can’t like the White Sox; you’re a Cubs fan.

I’ve been a Cubs season ticket holder since 89 and there is no disclaimer on my tickets that indicates a trip to a Sox game violates the contract.

Before a staff outing this year to watch The Sox, I took a picture of myself in my old Sox hat and put it on social media. The reaction was depressingly predictable.

It’s just one of those inflexible Chicago rules. You can’t like both baseball teams. You can’t move furniture out of a shoveled parking space in the winter. And whatever you do, you cannot ask for ketchup on your hot dog.

Here are my rules.

You can like any baseball team you want. You can like the Cubs on Monday and the Sox on Tuesday. You can take in an afternoon game at Wrigley Field and take the Red Line to a Sox game in the evening. They may even have fireworks after the game.

If there is furniture left in a snowy parking space for a week, you can put it in a pick-up truck and sell it on E-bay.

And if your 10 year old kid likes ketchup on his hot dog but is paralyzed with fear by the accumulated years of prejudice against inappropriate hot dog additions, you should tell him to yell it with pride. I want a hot dog with ketchup. This is America damn it and while ‘I may disapprove of what you eat, I will defend to the death your right to eat it.’

OK. Not to the death. That’s a dangerous precedent to set for the defense of condiments.

Can you be a fan of the White Sox and The Chicago Cubs? Unless they are facing each other on the diamond, there is room enough in your heart for two home teams. Because while the bitterness of our world asks that you close up your hearts, we need to learn how to keep our minds open. A little tolerance goes a long way. So, Go Sox.