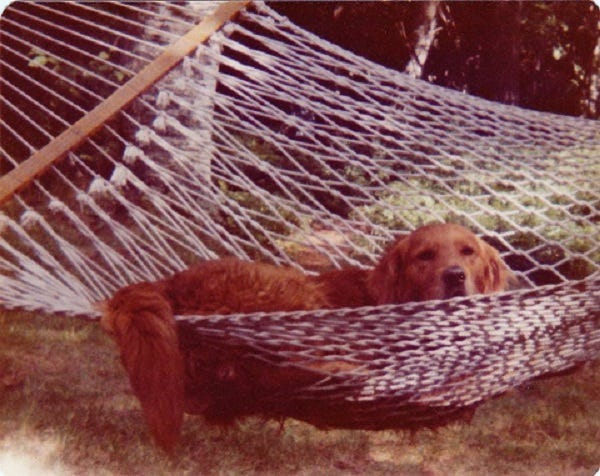 On National Dog Day, I don’t want to talk about fossil remains of domesticated dogs of 30,000 years ago.

Or the important roles dogs play in contemporary society.

When my wife was 14, her family moved to New York City. She made a heartbreaking decision. She would give up her dog so he could remain in the country where he had more freedom to frolic.

She moved to Manhattan and a family friend took pity and bought her a new Golden Retriever puppy.

She remembers the puppy trembling in fear the first time she took him out on the streets of New York. He was named Brandy. But one fateful summer vacation in Boothbay Harbor, Maine, a group of teenagers sat around a cottage and one of them said, “Your dog isn’t a Brandy. Your dog is more of a Berferd.”

Everyone laughed. Berferd panted. And he would never again be known by any other name. Berferd. The Wonder Dog.

When I was in college, my future wife and I rented an apartment together. It was the only way she could bring Berferd to school and he lived with us through college, through summer jobs, and through our first apartments together.

Berferd was the runt of the litter. Small and stocky for a golden. He was, to paraphrase A.A. Milne, a dog of very little brain.

He was not a good watch dog. Family members and intruders. He loved them all equally. The most menacing stranger was met with a marvelous enthusiasm.

He loved to swim and with his fluffy tail floating behind him, he looked like a magnificent golden beaver on the water. He preferred that we did not swim. It made him anxious.

His favorite activity by the water was to find a submerged rock. Pull it out with his paws. Dig a great big hole. Drop the rock in and walk away.

Berferd liked to wipe his mouth after meals. So he would dive face first into the nearest carpet or rug and rub his muzzle vigorously until he felt his face was clean and dry.

After every meal we intercepted the dog with a towel to wipe his mouth before he streaked dog chow all over someone’s nice rug.

When I came home from work, he would hear my car before anyone else and start thumping his tail on the floor. When I walked thru the door, his walk was impeded by the violence of his wagging tail. And he would accompany this outpouring of affection with a kind of singing. So I would exclaim.

What a good boy! What a good boy are you! A ritual I enjoyed enough that I now unconsciously use it on family members. Some free marital advice. Never talk to your wife as if she were a Golden Retriever.

What a good girl!

At any gathering, Berferd would assume the berfocentric position which is to say, the location where he would be equidistant from the most possible people.

And sometimes Berferd would be bad. He liked to find dead things and roll in them until he smelled like a suburban crawl space.

Berferd bumped his head on the corners of coffee tables. I think he did it on purpose. So we would comfort him.

And when a group of toddlers would run up to him, he would instinctively sink to his stomach so he couldn’t knock them over. In those moments, he was as gentle as a saint.

Our best friends remain that way in spite of their peculiarities. And those of us who have befriended a big ol’ dog have trouble saying goodbye. Berferd has been gone for over 30 years. He was with me when I was just starting out in this world.

He’s with me now.