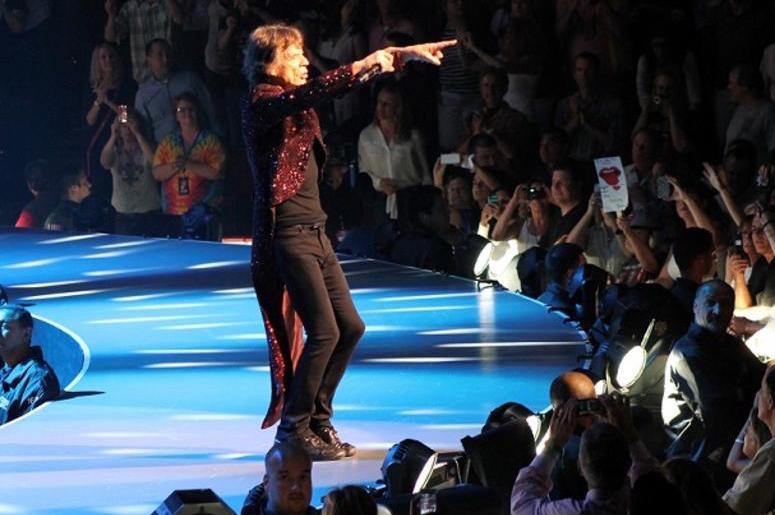 Mick Jagger and me.  Dizzy emotions recollected in eternity.  It happened like this.  October 2001.  Our nerves were jangled and our boot heels were loathe to ramble.

“Lin,” someone named Norm said, “Are you nervous about flying.”

I thought to myself, “Hmmm, I was nervous about flying before Bin Laden."

“Well,” Norm said, we’d like to fly you out to Los Angeles next week to do an interview.”

“Hold on,” he said, “It’s a Mick Jagger interview.

Westwood One Radio Network needs someone to do a one hour interview with Mick about his new solo album for a syndicated radio special.”

All of a sudden I find myself at the intersection of panic and elation.  Do they have any idea how deep my obsession is.  And how did the Rolling Stones become the center of my spinning universe?

Was it “Satisfaction” on a transistor radio hidden under a blanket late at night?

Was it trying to pound out Jumpin Jack Flash on my guitar?”

Was it Ruby Tuesday on the Ed Sullivan show?

Was it a solitary Sticky Fingers 8 track that sustained me on a road trip to Easton, Pennsylvania.

You see, there were times when I was lost and The Rolling Stones found me.

I fly to Los Angeles.  Dinner with the industry at Deniro’s Italian restaurant in Melrose.

Over grilled calamari, Ray from the record company  mentions casually,

“Oh, Jagger’s manager wants to see the questions for the radio special.”

Squid lodged in my throat, I realize that by morning I will need to take pages of scribbled notes and make them look a little more like a script for a documentary.

Up at 7am, I’m in the offices of the record company looking for a computer.

Five hours later my outline and questions have been forwarded to a manager I will never meet and I am standing in the lobby of the Ritz Carlton Beverly Hills.

Have you ever woken from a dream and thought it real?  Have you ever been awake and wondered when the dream would end.

I am ringing the doorbell to Mick Jagger’s room.

He answers and asks if I could come back in a half hour.  He’s having a chat with the new president of the record company.

Upon my return, two women whisk me into a bedroom to gather my thoughts.  An engineer is setting up two microphones in the living room of the suite.

One of the women starts talking in hushed reverence about how earlier in the day, Mick Jagger had called room service himself.  Not to be outdone, the other woman remarks that Mick had left the room and gone down to the lobby unattended, all by himself.

Mick Jagger and I sit down at a small table.  A warm breeze billows the curtains and we close the windows.  And then everybody leaves except for the engineer, Mick Jagger, and me.

To answer the obvious question, yes, of course, I’m nervous.  You can hear it in my voice. Now I’ve interviewed many musicians.  New wave dandies whose answers are single syllables uttered with contempt.  Singers who have forgotten how a microphone works.  Chartbusters too consumed with ennui to talk. And here on this October afternoon, Mick Jagger is all charm.  For all the one hit wonders who barely had time to give us their names, here is the lead singer of the Rolling Stones conversing as effortlessly as if we had met before and would meet again.

He talks about Pete Townshend coming over to play on the album. "He plays really loud," Mick reveals. He talks about carousing with Lenny Kravitz.

The focus of the radio special is his new solo album, but eventually I remind him of something he said in an interview captured in the film Gimme Shelter.

Through no fault or slight competence on my part, the interview goes swimmingly.

My only regret: when the engineer has us take a break, I say to Mick Jagger,

Did Mick Jagger really need me to tell him he was doing great?

After an hour, assistants return.  Record company executives are admitted and after a few pleasantries, Mick Jagger disappears.

Here's a short excerpt of Mick commenting on the interview that was included in the documentary Gimme Shelter.