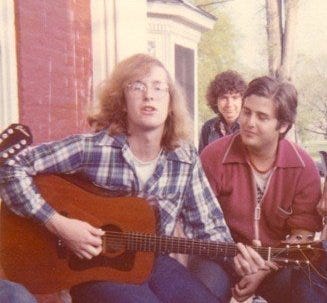 Sunni of Chicago asked,  "As a father, do you impart your college experience as a cautionary tale or a roadmap to fun?"

Ah Springtime. When the skies are bathed in grey rain-tones for weeks. When high school seniors are deciding what they are going to do for the next four years.

As a parent, you may feel a responsibility to encourage your young adult to soak up the college experience without soaking up too much beer.

Nothing attracts your teen-ager's attention more than the phrase, “ya know when I was in college…”

So whether your stories are a cautionary tale or a roadmap to fun, you have probably already covered them all. They did not listen the first time so now she will say,

“You already told me that drinking beer that has supported floating ping pong balls that have bounced around the floor of a fraternity basement is unsanitary.”

The problem is what you actually said was fraternities are unsanitary. It doesn’t matter. Indulge yourself. Your road map to fun and cautionary tales will only amuse one person. You.

I once asked a professor for an extension of my last paper for college. She said ‘No. I need it tomorrow.’

So I wrote a 40 page paper in a 24 hour spasm of literary caterwauling that summed up neatly one chapter in Edmund Spenser’s forgotten classic The Faerie Queen. My professor, an astute young woman, intuiting that this paper did not exist 30 hours earlier went straight to my advisor to ask if this sudden sprawling epic was indeed the work of a procrastinating senior of my description.

My advisor assessed the casual misuse of multi-syllabic modifiers, the meandering sentences. Yes, he concluded, this is a Lin Brehmer stylistic tour de force. B+

Here are two encounters I never bothered to share with my family that I can now share with yours.

The poet Allen Ginsberg, you know the guy,

“I saw the best minds of my generation destroyed by madness.”

Yeah, Allen, join the club. Allen Ginsberg gave a performance in our college chapel in 1972 and after he finished I managed to walk up and ask him a question. I wondered if his college experience was important to his progress as a writer. Allen Ginsberg told me it was a stupid question.

Second. A roadmap to fun.

The writer Norman Mailer gave a reading in the same chapel the same year, but after his appearance, he wound up with a couple dozen of us in the sort of inn where the wooden tables had initials carved into them. A woman said she was reading James Dickey’s novel Deliverance, the one that later would turn into a cinematic travelogue of the deep south

She said she had a professor that suggested that the river was a symbol of a woman’s birth canal although she did not say birth canal. Norman Mailer laughed and we all got drunk.

A cautionary tale and a roadmap to fun. Both teach the same lesson.

Let other people ask the questions.

And it’s all right to get drunk if it’s with a literary giant.

College is where you learn that any knowledge is valuable.

Lunch trays can be used as toboggans.

You can take over a radio station if you wrap pizza boxes around your head and cut out eyeholes.

Watering a green leafy herb with tequila will kill it.

Flannel pajamas are more alluring than you think.

Your campus does have a library.

Solitude is good for the soul.

And, here’s the important one: the girl you date sophomore year may be the one you marry.