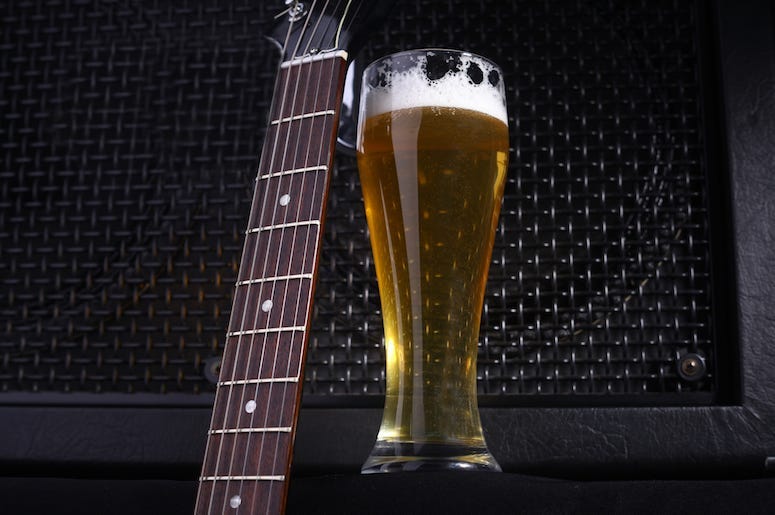 April 7th is National Beer Day and if there's any time to relax and grab a cold one, it's now.

Beer and music go hand in hand with one another as many artists have penned songs dedicated to the beverage.

With the rise in popularity in craft beer, musicians have gotten in the game as well partnering with brewers to release their own specially crafted concoction.

For those of you celebrating National Beer Day or wanting to get to know a little more about your favorite artist, here are five bands that have their own beer.

Frontman and beer aficionado Bruce Dickinson teamed up with British brewery Robinsons to release their own line of beer called TROOPER. The partnership has released all different kinds of beer since their founding including IPA's, Ales, Lagers, and other specialty beers. Appropriately, each beer label features heavy metal inspired artwork similar to those found on Iron Maiden's albums. For Dickinson, the opportunity to have an Iron Maiden beer was a dream come true. "I thought I'd died and gone to heaven when we were asked to create our own beer," he said.

On this day in 2013, IRON MAIDEN introduce 'Trooper Beer'. pic.twitter.com/VdRXyJXjCZ

In celebration of the 40th anniversary of "Bohemian Rhapsody," Queen took the opportunity to release their very own beer, the Bohemian lager. Not ones to pass up the opportunity to promote the grandeur, the beer was brewed in the historic region of Bohemia in the Czech Republic. For those wanting to accompany the beer with a support, we suggest finding a bottle of Killer Queen Vodka.

Back in 2016, New Order teamed up with English brewer Moorhouse's Brewery to release Stray Dog, a beer named after a song from their 2015 album Music Complete. The golden ale served as the bands foray into the beer world, but was for a limited time only. The beer was only available in England leaving American beer and New Order fans in one bizarre love triangle.

It's only appropriate that a singer-songwriter like Frank Turner takes a unique twist on a classic beer. Turner teamed up with UK's Signature Brew to release Believe, a 4.8% ABV traditional wheat beer with citrus and orange flavors. "Being asked to design a beer was a new one for me - I don't know masses about beer, other than that I like drinking it a whole lot," Turner said at the time. "In the end I learned a lot, had a fun evening getting hammered, and ended up with a beer with my name on the label, which is pretty much the pinnacle of any road-dog's ambitions."

Back in 2011, Pearl Jam and Dogfish Head Brewery teamed up to create a beer celebrating the 20th anniversary of the band and their legendary debut album Ten. Called the Faithfull Ale, the beer is as heavy hitting as many of Pearl Jam's songs as the Belgian-style golden ale clocks in at 7% ABV. Unfortunately, the beer was a limited-edition production that is hard to come by today.