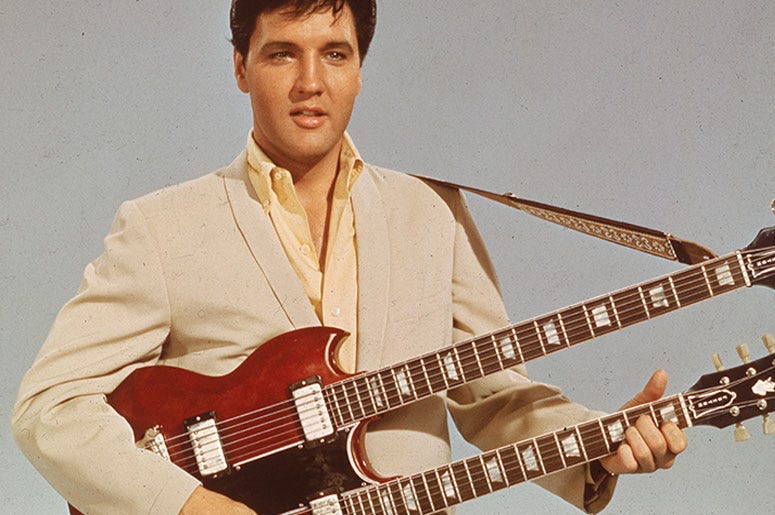 Our song of the day is from Elvis Presley's days at Sun Records in Memphis. But before you listen to Elvis, in the next post, check out the original of Baby Let's Play House. It was a blues song written and recorded by Arthur Gunter, in 1954, just a year before the new kid on the block covered it. Blues meets country.

Our song for the day for Sundays is a song that influenced the Beatles. Since John Lennon said more than once that there would have been no Beatles if there was no Elvis, it will make sense to visit Elvis' music more than once. Sun Records is a good place to start. In 1955 Elvis covered a blues song and his version went to #5 on the country charts. It is available on the Sun Sessions album. I'm thinking if you don't already have this in your collection, get it. This is where country meets blues and the hotness of a young Elvis. Kaboom. An explosion. Rock and roll. Those four young lads in Liverpool were shaken to the core by this music coming out of the USA. It was life changing. Heck, more than that it gave them reason to live. The sexual energy in that Elvis record made them want to BE Elvis. Just like 9 years later millions of kids wanted to be John Lennon. Thats how it works. This song influenced John so much he ripped off a line of the lyrics on the Rubber Soul album a decade later. Unfortunately, it turned out to have been one of the most problematic of his career. I'd rather see you dead little girl than to be with another man. In Run For Your Life. It was in sharp contrast with "the word is love" on the same album. But then John was a complicated young man. He later shared in a  discussion of the song, saying it was a throw away. Probably my least favorite Beatle song. But before we get bent out of shape about the violence in those lyrics, there is a long tradition of that in poetry and music. From Jimmie Rodgers to Jimi Hendrix. That's a discussion for another day. Right now the point is, this Elvis song is the essence of Rock and Roll. Just ask the Beatles.