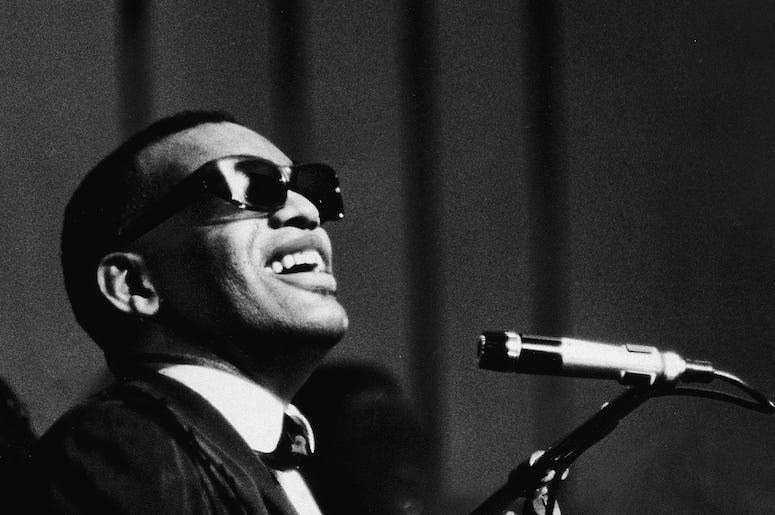 Our Monday song of the day covers songs and artists that we study in my class on the History of Rock & Soul at Columbia College. Tonight in class we'll continue our study of the soul music of the 70's. But in the Fall semester we see how we got from big band swing to Rhythm & Blues to Soul.

The man that made that transition from R&B to Soul was the great Ray "The Genius" Charles. It was his introducing gospel music to R&B that took the music from a swing and blues sound to music from church. Ray took I got a savior and transitioned to I got a woman. The church ladies didn't like that one bit. Sacrilege. He added the "girl group" The Cookies (covered by The Beatles!) and changed their name to the Raelettes. They brought the gospel choir sound and the call and response of the African-American church. And they were sassy. Ray kept the big band, and showed off his jazz chops on the piano. What a show.

Later he recorded four albums of Country & Western classics. You talk about versatile. He was also one of the first artists to cross over during the time of Jim Crow and segregation. And he was a major player who helped put a young Atlantic Records on the map. His contributions were so great, and his life so interesting I've included all four parts of a one hour documentary that covers Ray's career in the context of other music and what was going on culturally and politically at the time In class I sometimes show a bit of a documentary especially when it goes back to before when the students mothers were born. Gives them a bit of a feel for the times. We also see a minute or two of lots of songs.

I post these songs and the complete documentaries so they have access to them if they are serious about learning this music. Seems like the best documentaries are from England. Figures since they always get American music than we do. This is an outstanding BBC biography which also includes some of my faves like Louis Jordan, Little Richard, Allen Toussaint and Ruth Brown And James Brown too. it's called Ray Charles...The Birth of Soul. Really worth checking out. I'll post all four segments.

And the song of the day is Ray's version of a Percy Mayfield song, Hit The Road Jack. It was a #1 hit in 1961 and really showed off the Raelettes. I will also include a Percy Mayfield recording from 1960 that sounds like a demo. It also features Margie Hendricks from the Raelettes. So sit back and spend an hour getting to know Brother Ray.