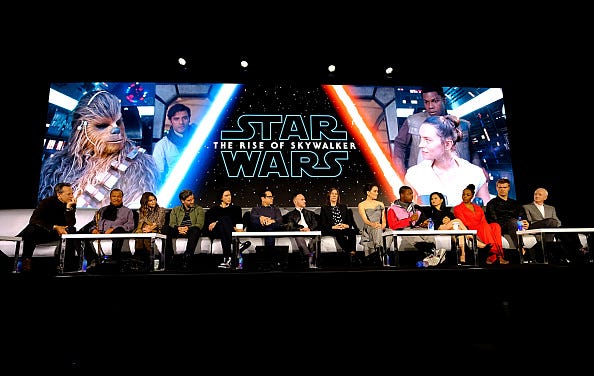 The force is with Coca-Cola.

The beverage company unveiled their latest merchandise tie-in in anticipation of the release of “Star Wars: The Rise of the Skywalker” which features Coke bottles outfitted with lightsabers that actually glow, reported Delish.

Depending if you’re with the Resistance or the First Order, fans can choose bottles with images of Rey (Daisy Ridley) or Kylo Ren (Adam Driver) with blue and red lightsabers that light up whenever you touch the label.

The cool illuminating feature is possible thanks to battery-powered organic light-emitting diodes (OLED) technology and can be activated up to 500 times before it turns completely to the dark side for good.

To get your hands on one of the limited-edition items you will have to travel to a country far, far away, as they are only being made available in Singapore.

Coke is releasing 8,000 of the highly-coveted bottles in the city-state as part of their Galactic Hunt promotion.

Even if you get your passport together and make the overseas trip, fans will then need to solve clues revealed on the brand’s Instagram and Facebook in order to track down “the location of our Gatekeepers.”

These so-called Gatekeepers will then give you a pass which can be redeemed at participating 7-Eleven stores in Singapore for the light up bottles. After all that you’re going to need something to quench your thirst!

The promotion is currently running until December 22nd, so book your tickets now.

If you don’t have the time or money or energy to get to Singapore, you can indulge the wannabe Jedi on your Christmas list with a bunch of “Star Wars”-inspired gifts under $75, Baby Yoda merchandise and even some slick ‘Space Battle’ Adidas kicks.

Or you can just pre-order your tickets for “Star Wars: The Rise of the Skywalker,” which hits theaters on December 20th.