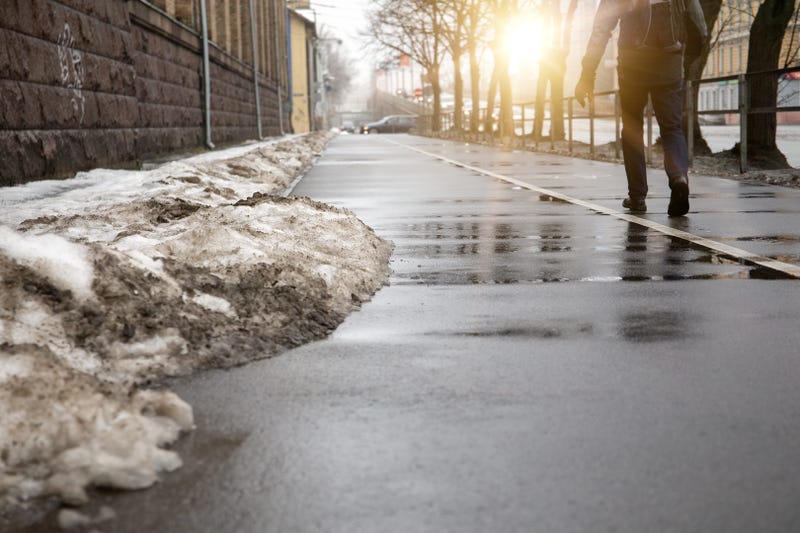 CHICAGO (WBBM NEWSRADIO) -- The Chicago area woke up Tuesday to its first measurable snow of the season — but it was quickly fleeting as rising temperatures and rain turned streets and sidewalks into puddles.

About 0.7 inches of snow was recorded at O’Hare International Airport by 9:30 a.m., while Midway Airport had 0.4 inches by 6 a.m., slightly below a predicted half in of snow, according to the National Weather Service.

If you measured snow before it started to melt, we'd appreciate your reports. Please include your location. Thanks! #ilwx #inwx

Snow began falling at O’Hare by 5 a.m., and transitioned into rain by 8:30 a.m. as the temperature rose above freezing, weather service meteorologist Kevin Donofrio said.

The morning commute wasn’t excessively affected by the snow, but many roads were sloppy and slushy, especially in areas during heavy snowfall overnight, he said.

“This would be the first accumulating snow of the season,” Donofrio said, noting Chicago’s first trace amount of snow Oct. 26. The city normally sees its first measurable snow Nov. 17, and its first snow about an inch on Dec. 7.

This pic is from Rockford but is common across northern IL & far northwest IN early this A.M. Roads are slippery with snow & the air near freezing. Temporary very low visibility is occurring in snow, especially over the Chicago area through daybreak. Allow extra time! #ILwx #INwx pic.twitter.com/cMoulAIiJx

The highest reported snow total Tuesday was suburban Aurora, which had 3 inches of snow at 6 a.m. Tuesday, and Bloomingdale in DuPage County, with about 1.9 inches. Since temperatures were so close to freeing, snow totals varied throughout the Chicago area Tuesday depending on the rate of snow fall.

“Where it wasn’t coming down heavy, it wasn’t accumulating,” Donofrio said.

The rest of Tuesday will be a continuation of the current weather, with periods of rain continuing into Wednesday and possible storms to the south, Donofrio said.

Snow will continue through mid-morning, mixing with and eventually changing to rain by noon. The snow will be moderate to briefly heavy at times, especially prior to 9 a.m.

The good news is that the precipitation will leave the area by Thanksgiving, which is forecast as mostly cloudy with a high near 50 degrees.

“The Thanksgiving holiday looks nice. And it’ll be a little colder to start next week,” he said.

Unsettled weather will result in precipitation thru Wed. Snow early this AM will result in some accums of 1 to 2 inches in some areas of far northern IL. Snow changes to rain from south to north later this AM. Quiet and seasonably mild weather for Thanksgiving. #ilwx #inwx pic.twitter.com/9eAFUafyFu