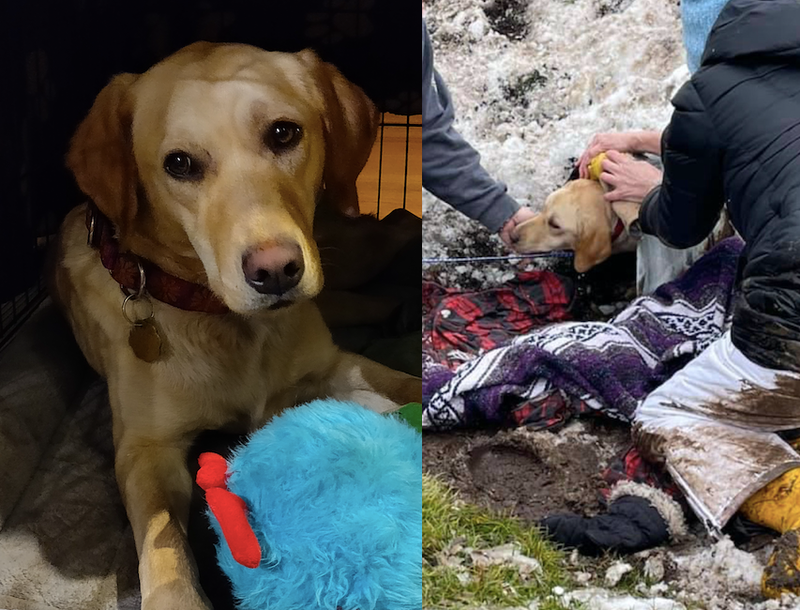 Daisy the dog, left, after her flight and rescue, right. Photo credit Images provided to WBBM Newsradio
By Steve Miller

(WBBM NEWSRADIO) — A 15-month-old yellow lab named Daisy brought dozens of people together through social media after she bolted two weeks ago in Kane County.

Daisy had already been through a lot before she came to live with Rich English and his wife in Sleepy Hollow early this year.

“She had been living in the wild under the canopy of a pickup truck,” he said.

English gave Daisy a comfortable home. But a week ago, she got spooked and bolted.

The search had quite a following on social media, he said, with help from Ring doorbell cameras and the Nextdoor app.

“My wife and I couldn’t have done it without their help. Because we were getting very despondent,” English said. “And my wife even said to me, ‘Rich, if this doesn’t have a happy ending, I’m never going to get a dog again. So, that’s how low we had gotten.

“And the people just kept saying, ‘We’re praying for you. Stay positive. We’ll find her.’”

On Sunday, a motorist spotted Daisy. Then the dog, still bolting, got caught in a debris-packed drain pipe.

Authorities were able to extricate her with help from the Jaws of Life.

“So many people were following it and vicariously living the experience with us, I feel. And they were truly so happy when she was found,” English said. “It was so heartwarming.”