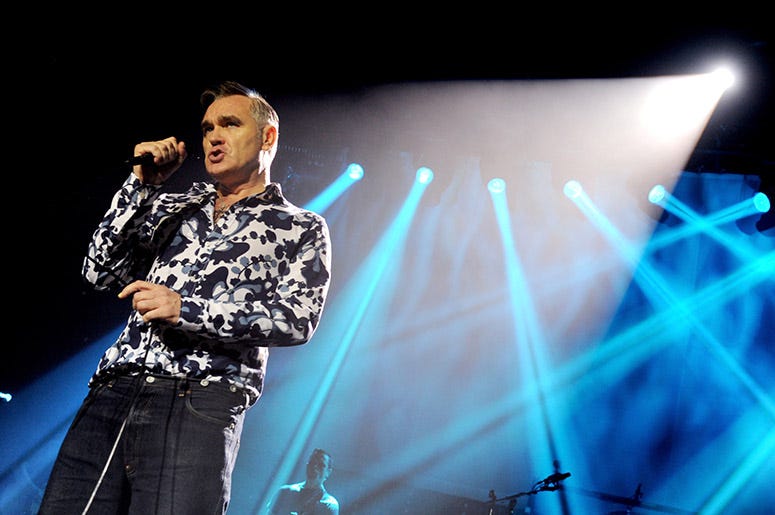 Morrissey would sing a song tonight, but he hasn’t got a label to hear.

The outspoken singer announced via his website that BMG Records has dropped him as an artist. “Following the March 2020 release of I AM NOT A DOG ON A CHAIN (#1 Scotland, #1 Poland, #3 Britain, #3 France, #10 Spain, #13 Germany, #2, #9, #17, #18 U.S.A. – depending on which official chart you follow), BMG have appointed a new Executive who does not want another Morrissey album,” the long harangue reads.

He goes on to expose a creative rift between his musical taste and a new executive at the recording company. “Instead, the new BMG Executive has announced new plans for 'diversity' within BMG's artist roster, and all projected BMG Morrissey releases/reissues have been scrapped,” he writes.

“’This news is perfectly in keeping with the relentless galvanic horror of 2020… we would be critically insane to expect anything positive.’”

BMG is responsible for Morrissey’s 2017 album Low in High School, 2019’s California Son, and his latest March release I Am Not a Dog on a Chain. The former Smiths lead singer believes each of the works were incredibly relevant to his career. “My three albums with BMG have been the best of my career, and I stand by them till death,” he proclaims.

“It's still important to me to do music my own way, and I wouldn't want to be on a label that dictates so specifically how their artists should behave - especially when the word 'talent' is notably never mentioned." BMG representative Alistair Norbury responded to Morrissey’s gripe simply stating, “There are too many cases of successful artists languishing at labels who are no longer interested in them.”