Don't put it past The Rolling Stones to come to town and decide to play an impromptu gig. Even though they sell out stadiums fitting tens of thousands of attendees, they still get great joy from cramming into a 200-300 person venue to play a gig.

While the rumors of the Stones playing a secret gig in Chicago during their upcoming No Filter tour dates are nonexistent at the moment, they certainly have a history of putting together secret shows in Chicago.

Let's take a look back at every instance The Rolling Stones have played a secret show in Chicago.

Perhaps the greatest secret gig in the history of music. Prior to kicking off a string of shows at the Rosemont Horizon on the Tattoo You Tour, The Rolling Stones went down to the South Side to take in a Muddy Waters show. What resulted was an all star night of music featuring Waters, Mick Jagger, Keith Richards, Ronnie Wood, Buddy Guy, Junior Wells, Ian Stewart, and many more appearing on stage.
The concert was immortalized in July 10, 2012 when it was released as a DVD and live album, Live at the Checkerboard Lounge, Chicago 1981. The night saw the Stones pay homage to their blues influences running through a number of tracks alongside Waters.

While logic would dictate Checkerboard Lounge owners L.C. Thurman and Buddy Guy were rolling in cash due to this historic event, that wasn't the case. In an interview with the New Yorker, it was revealed that Guy didn't make a dime on the event. The Rolling Stones brought such a large entourage with them that they almost filled up the whole venue leaving virtually no room for paying customers.

The Rolling Stones showing to play the Double Door stage seems like the slimmest of chances, but where there's hope reality can occur. The concert wasn't announced until the morning of the show when the band's name showed up on the marquee. A mad rush to Wicker Park occurred as fans rushed to be one of the lucky few to purchase wristbands for $7.

XRT Music Director John Farneda was one of the lucky few who were in attendance at the time. He said XRT got clued into the concert just before the public did. The show coincided with an XRT 25th Anniversary event at Galleria Marchetti where Poi Dog Pondering was playing. Farneda, alongside Lin Brehmer and former XRT Program Director Norm Winer ducked out of the event and rushed across town to the Double Door to witness a seminal moment in rock history.

Making the scene even better was the trio dressed to the nines in tux's as the XRT 25th Anniversary event was a black tie affair.

The Stones only played 13 songs that evening, but for $7 and at the capacity of the venue, it made it the show of a lifetime. 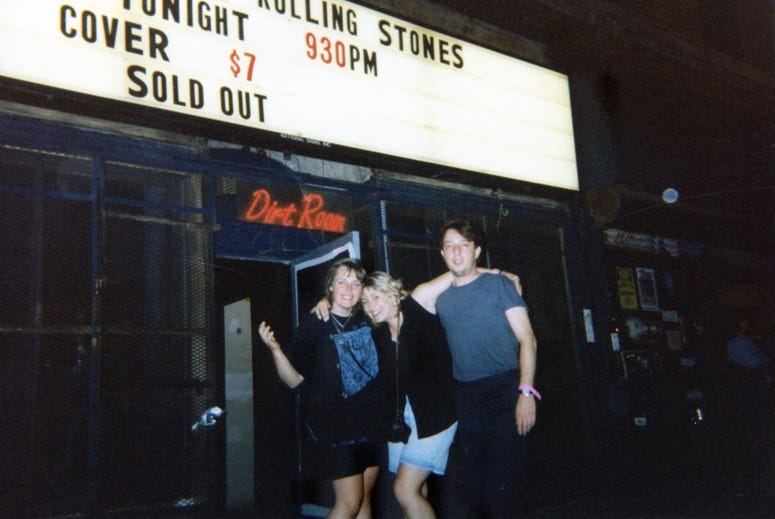 Most bands wouldn't be able to call a 5,000 person venue an intimate gig, but most bands aren't The Rolling Stones. The Stones played the Aragon Ballroom as part of their Forty Licks World Tour and while not necessarily a "secret show" like the others listed here, it fit the mold of the band playing much smaller venues. According to Chicago Music Journalist Jim DeRogatis, the Stones opted to perform "theme" shows during the small-venue gigs on the tour by highlighting a different album with five or six songs.

The late Dr. John served as the opening act for the evening and joined the Stones to perform a cover of Willie Dixon's “I Just Want to Make Love to You."

Perhaps the biggest surprise of the evening came when U2's Bono made a cameo on stage to join the band for “It’s Only Rock and Roll."

DeRogatis wrote of the moment, "as the band jammed out the ending of the tune, Bono’s chant of “Going to a go-go” was adopted by Jagger to become “Going to Chicago,” instantly becoming a moment that this city’s fans will cherish forever."