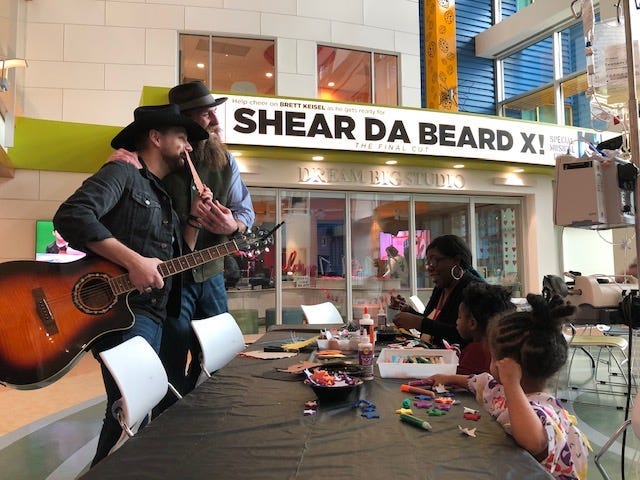 Brett Keisel will forever be one of my FAVORITE players to be a part of the Pittsburgh Steelers organization.

For the past ten years, Brett has done the 'Shear Da Beard' event, shaving off his massive beard for fun, but also raising money for all of the wonderful kids at UPMC Children's Hospital of Pittsburgh.

Can you believe that massive beard of his has raised close to $1 million dollars?!

While Thursday night might be the last time that Brett shaves off his beard (at least for the public) at Jergel's in Warrendale for a sold out crowd, that doesn't mean he doesn't want to do everything he can for the kids at UPMC Children's Hospital.

The best kind of sandwich is a BRETT sandwich 🤩🙌🏼🎶 We can not thank @brett_keisel_, @brettkissel and @childrenspgh enough for all of the hard work they do and for letting us participate in their private family/friends day gearing up for the final #ShearDaBeardX event happening tomorrow night at @jergels!

Stoney and I felt so lucky to be invited to UPMC Children's Hospital Wednesday afternoon by Brett and his Canadian country singer friend, Brett Kissel (Yes, that is his ACTUAL name), to spend some time with the children, listen to live country music, make paper beards and get to witness a moment in time where the family got to forget about the circumstances as to why they were there in the first place.

Thank you to UPMC Children's Hospital of Pittsburgh, Brett Keisel, Brett Kissel, the children and their families for letting us get to spend the afternoon with them.

And an extra huge (x 99) thank you to Brett Keisel for all that you've done for the city of Pittsburgh!